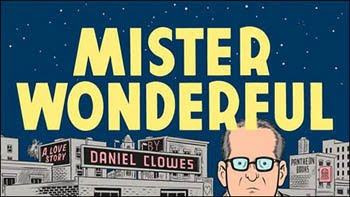 If you’re more inclined to enjoy graphic novels of the Everyman rather than Superman, then you might want to check out some books by Daniel Clowes. Clowes is responsible for superbly getting it right about pseudo-intellectual, angsty teenagers faced with graduating into adulthood in his 1998 graphic novel, Ghost World. The 2001 movie stars Thora Birch, Scarlett Johansson, and Steve Buscemi.

Clowes’ newest graphic novel is Mister Wonderful, a woe-is-me tale that takes place the evening of a blind date between a broken middle-aged man and woman who have little self-esteem and a lot of baggage. Before becoming a book, Mister Wonderful was a serialized comic strip in the New York Times Magazine.

Marshall had a “shockingly happy” childhood, but adulthood hasn’t been so kind to him. His wife slept around with all but one of his friends—the “but one” being the man who set him up on the date—so in the end he had neither wife nor friends. After a six-year dry spell he took up with a crank addict who robbed him blind, and now here he is, waiting for the woman of his dreams who is 49 minutes late.

What's interesting about dates arranged by friends is that some of the inspiration that spurs a couple on to see the date through comes from knowing that there must be a good reason that your friends thought you would be perfect for one another. There is an interlude in the middle of Mister Wonderful where we humorously see that's not the case for Tim (Marshall's friend) and his wife, Yuki (Natalie's friend).

Marshall is so used to living inside his own head that his thought boxes have overtaken his life, even covering up the voice of his Ms. Right. The evening unfolds about how you’d think it would.

If you're feeling low and in the mood for some schadenfreude, then Mister Wonderful just might cheer you up.
By Tressa Fancher