Recovering the Classics: A New Look for an Old Book 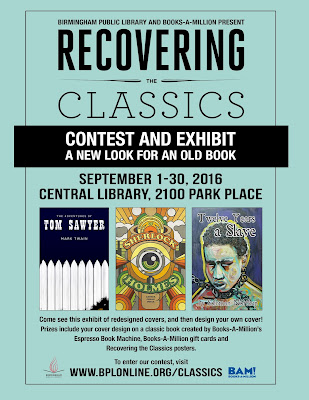 "Don't judge a book by its cover" is a saying to evaluate something on its content rather than its outward appearance. However, we often judge a book by its cover to determine if it's worth reading, and many of our greatest classics still wear poorly designed or auto-generated covers that fail to capture what makes these books exciting and inspiring. Recovering the Classics is a crowdsourced collection of original covers for classic books in the public domain created by illustrators, typographers, and designers of all stripes. Its partners include the Creative Action Network, Harvard Book Store, Plympton's DailyLit, the White House, the New York Public Library, and the Digital Public Library of America. The goal is to bring an exhibit of redesigned cover posters to each of the 50 states, and the Birmingham Public Library (BPL) is representing the state of Alabama. The Central Library will have the main exhibit of Recovering the Classics posters, and other BPL branches will have smaller exhibits.

BPL has partnered with Books-A-Million to host a contest for Alabama artists of all ages and abilities to design a cover for a classic book. Prizes include your cover design on a classic book created by Books-A-Million's Espresso Book Machine, Books-A-Million gift cards, and Recovering the Classics posters. To enter the contest, visit www.bplonline.org/classics. Both the exhibit and contest will run September 1-30, 2016.
By Laura Gentry