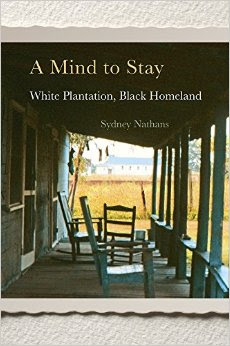 What: Author talk and book signing by Sydney Nathans, author of A Mind to Stay: White Plantation, Black Homeland
When: Monday, March 13, 2017, 6:00 p.m.
Where: Central Library, Arrington Auditorium
Details: Free and open to the public. Books will be available for purchase.

A historian who used the Birmingham Public Library Archives Department to research a book about African Americans who moved from being slaves to homeowners will hold a book signing and talk at the Central Library in March. Sydney Nathans, author of A Mind To Stay: White Plantation, Black Homeland, will speak on March 13. In A Mind to Stay, Nathans tells the rare story of African Americans who moved from being enslaved to becoming owners of the very land they had worked in bondage, and who have held onto that land from emancipation through the civil rights era.

Nathans' author talk/book signing is among two taking place in March as part of BPL’s Birmingham Bound author series. On Monday, March 20, at 6:00 p.m. inside Central Library's Arrington Auditorium, author Michael W. Fitzgerald will discuss his book, Reconstruction in Alabama: From Civil War to Redemption in the Cotton South.

Reconstruction in Alabama is the first new study of this critical period in Alabama’s history to be published in decades, said Jim Baggett, head of BPL’s Archives & Manuscripts Department. Fitzgerald, professor of history at St. Olaf College in Minnesota, explores the impact of Reconstruction and its aftermath from the Civil War to the civil rights movement. Books will be available for purchase.

The Birmingham Bound author series recognizes authors who researched their books in the Birmingham Public Library Archives. Historians, journalists, and other writers from around the world have produced hundreds of books using the Archives’ collections and these books include five recipients of the Pulitzer Prize.

Both programs are free and open to the public. For more information, contact Jim Baggett at 205-226-3631 or jbaggett@bham.lib.al.us.
By Tressa Fancher