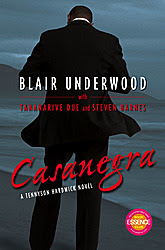 Blair Underwood has pulled out the big guns for his first novel by teaming up with husband and wife authors Steven Barnes and Tananarive Due. Their collaboration on Casanegra: A Tennyson Hardwick Story is garnering praise from book critics, readers, and fans of Underwood’s day job—acting.

Casanegra is a play on the classic movie title Casablanca, and it is the first in a series about Tennyson Hardwick’s adventures in the seedy city of Hollywood, California. Ten Hardwick is a former gigolo and current actor-on-the-rise. When he reunites with rapper Afrodite, a former client, he becomes a suspect in her murder. Hardwick has to use his charm, good looks, and street smarts to clear his name.

Casanegra mixes vintage noir with an urban fiction edge. There is plenty of police corruption, gangster rivalries, action, and steamy scenes to keep you entertained as Hardwick goes on a manhunt for the real killer.

With the book taking off as it has, you can bet that a team of screenwriters are busy getting it ready for the big screen.