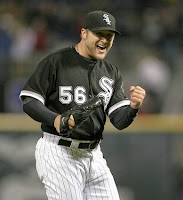 One of the team's biggest fans, President Barack Obama, called to congratulate Buehrle during his post-game press conference. Buehrle joked later about the 30-second phone call made by the President. His teammates contributed greatly to his achievement, including a spectacular catch by centerfielder Dewayne Wise in the top of the ninth to save a home run. The White Sox defeated the Tampa Bay Rays 5-0.

Drop by the library to check out some of the new books on baseball: