A Tennis Match for the Ages 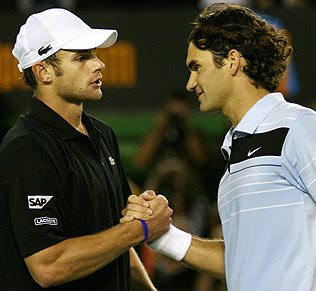 If you love tennis, you should still have a smile on your face after yesterday’s Wimbledon men’s final. Forget about Roger Federer, how amazing was Andy Roddick? Sure, Roger Federer now holds the men’s record for most grand slam titles (15). Yes, he is one Wimbledon title away from tying Pete Sampras’ win record (7). This win also placed him on the short list of people who’ve won the French Open and Wimbledon in the same season. But what about A-Rod, in this case, Andy Roddick? This is the third straight year that we have had an epic Wimbledon men’s final. In 2007, Federer battled Rafael Nadal for five sets to clinch the win with a 6-2 victory in the fifth set. Tennis fans begged for more, so in 2008, Federer battled Nadal again for five sets in a match that lasted nearly 5 hours. It was the longest grand slam final in history. Nadal finally prevailed in the fifth set 9-7. If you want to see a grown man cry (Federer), watch the footage of the trophy presentation.

I have been worried about American men’s tennis since Pete Sampras and Andre Agassi retired. We’ve had a few glimpses of brilliance, but no one has emerged to dominate tennis the way those two did. Andy Roddick has had great success in the past, but to be honest, I thought his best days were behind him. That is, until I saw him play yesterday. Roddick stood toe-to-toe with perhaps the greatest player of all time and he didn’t blink. He broke Federer’s serve twice leading to his first- and fourth-set wins. Roddick's serve was only broken once in the fifth set which clinched the victory for Roger Federer (16-14). Although this match didn't last as long as the 2008 final, it set a new record for number of games played in a grand slam final. Roddick hit winner after winner with his backhand and his net play was outstanding. His conditioning was stellar and he continued to hit serves in the 130s late in the fifth set. I have watched Andy play for years and I always thought he had the potential to be one of the greats. Based on his play in the Wimbledon final, I can’t wait to see what he has in store in the future.