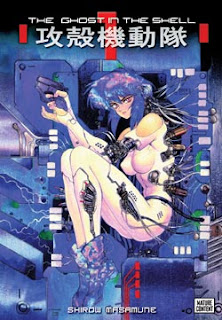 Imagine the near future. Imagine that instead of using a clunky keyboard and monitor to read this website, you could have this blog downloaded directly into your brain. Imagine that the line between Man and Machine continues to blur until computer viruses infect living minds, and corporations and governments can reprogram people’s thoughts and personalities to suit their political agendas. Such is the world of Shirow Masamune’s ground-breaking manga, Ghost in the Shell.

Created in 1989 and first released in the U.S. by Dark Horse Comics in 1995, Ghost in the Shell has spawned two follow-up volumes, several movies, and a popular animated TV series. Kodansha Comics has recently rereleased Shirow’s original masterpiece in a special edition on the comic’s 20th anniversary.

Ghost in the Shell tells the story of Major Motoko Kusanagi and the members of Section 9, an elite unit of 21st century crime fighters who specialize in taking down the cyber-terrorists of the future, including ghost hackers – criminals who reprogram their victims into mindless slaves and destroy their very souls. While on the trail of one such terrorist, the genius known only as the Puppet Master, Kusanagi begins to suspect that her nemesis may be an intelligence born from the fabric of the Internet itself with no real existence in the physical world.

Shirow’s story contains enough detail and intrigue to make this more than just a casual read, and his artwork displays an almost frightening level of technical complexity. Because Ghost in the Shell was originally published before the onset of the current manga craze, the American edition was specifically designed to introduce newcomers to the world of Japanese comics. As a result, the book is designed to be read left-to-right, not right-to-left as traditional manga. Also, each chapter begins in full color and only after several pages reverts to Japanese comics’ usual black-and-white. The result is a blending of both Eastern and Western styles to tell a story that is as prophetic and compelling now as it was twenty years ago.