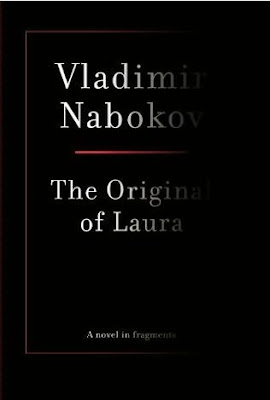 One of Vladimir Nabokov's last wishes before his death was for the 138 index cards that comprised The Original of Laura—the novel he was working on when he died in 1977—to be burned. His wife, Vera, never granted the wish because of “age, weakness and immeasurable love.” But another reason she may not have burned the work-in-progress was because her husband also wanted to burn Lolita, but Vera stopped him on the way to the incinerator. Dmitri Nabokov sat on his father's unfinished book for over thirty years before having it published. The work had been previously viewed only by Nabokov's wife, son, and some scholars.

Make no mistake, this is not a novel but a rough rough draft, and some scholars feel it may serve to diminish Nabokov's name as a writer. But fans of Nabokov will enjoy experiencing the progression of his writing. The book reproduces the handwritten index cards—perforated for removal—that show the markings of his editing process.

The actual index cards are headed to the Christie's auction block on December 4 and are expected to sell for between $400,000 and $600,000. Your best bet is to plunk down $35, tear out the index cards, and play at being a millionaire.

What The Original of Laura is about:

Young Flora is married to a fat, rich man with whom she becomes bored after many years. One of promiscuous Flora's lovers has written a roman a clef about her titled My Laura, and it becomes a scandalous success that eventually ruins her. Poor Flora. Groped at age 12 by by the man who leches after Lolita—Hubert H. Hubert—and now this tell-all.

Links:
Take a look inside The Original of Laura
By Tressa Fancher