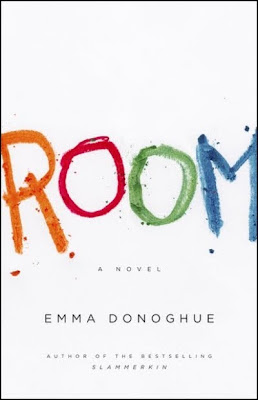 In 2008 the story broke of a 42-year-old Austrian woman named Elisabeth who had been held captive in a cellar for 24 years. Her father, Josef Fritzl, imprisoned her in a 380 x 600 sq. ft. room and over the years fathered seven children with her. Three of the children were taken upstairs as babies to be raised as foster children by Fritzl and his wife, the others were left in the cellar to be raised by their mother. When the children heard noises overhead, their mother told them that "Heaven is up there."

What must life had been like in that bunker home for Elisabeth and her children? Emma Donoghue explores this question in Room.

Room begins the day that Jack turns five. He went to sleep in Wardrobe the night before when he was four, and now he's five, and his Ma knows that Room can't contain them any longer. So she begins to think of ways to trick Old Nick—their captor—into opening the door and letting them Outside. But while the 11 x 11 shed that is Room has been Ma's prison for seven years, it's been the only home that Jack has ever known, and he's content to stay there with Ma, TV, his crayons, and Dylan the Digger.

Donoghue creates two great characters in Ma and Jack, and it is obvious early on that although Ma is sick at the thought of raising her child in Room, she would not have survived without him all these years. Educating, feeding, and conversing and laughing with Jack are the things that has made life bearable in her tiny world.

I appreciate how Donoghue doesn't turn Ma and Jack's rescue into a plot straight out of a thriller, because what's important in Room is what comes before and after. The second half of Room deals with life Outside, where Ma is reunited with her mother, father, brother, and friends, and introduced to the new people who joined the family in her absence. The struggle to reclaim her life is difficult, but the transition is even tougher for Jack, who thinks the world is too large, too loud, too scary, and longs to be back in Room with Ma and the scant things that brought him comfort.