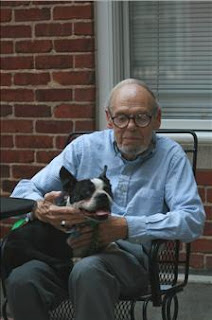 BPL lost a great one last Friday. It is common knowledge that Dr. Marvin Yeomans Whiting built the Archives Department from the ground up (or down, rather, seeing as how it's in the basement.) Like many of us, Dr. Whiting loved the library. He also loved Alabama and Southern authors, as well as classical music, and a good, tobacco pipe. He was a master entertainer and one of the finest raconteurs that our city has ever claimed.

He was forever an archivist and historian and his list of books is quite remarkable (and listed below in his bibliography).

I came across a biography of him that current Archivist Jim Baggett wrote on the occasion of BPL's 2001 Alabama Bound Author Conference, where Dr. Whiting was a featured author. This short piece does a fine job of summarizing the accomplishments of this great man. Here it is:

"No individual has done more to collect and preserve the documentary history of Birmingham, Alabama than Marvin Yeomans Whiting.

"Born in Fort Valley, Georgia in 1934, Whiting became the third generation of his family to attend Emory University, and completed a B.A. degree there in 1956, majoring in literature. He attended the Divinity School at Yale University for one year, and then returned to Emory to earn a B.D. from the Candler School of Theology. Whiting married in 1960, served as minister at two small Methodist churches in rural southwest Georgia until 1962, and as an instructor and Assistant to the Headmaster at the Lovett School in Atlanta until 1964. Returning once again to Emory, Whiting completed the M.A. degree with a specialization in American colonial history. He then moved to New York to pursue a Ph.D. in the joint doctoral program at Columbia University and Union Theological Seminary, completing his dissertation in 1970. Whiting taught at Jacksonville University in Jacksonville, Florida before returning to Emory one final time in 1974. He completed the M.A. degree in librarianship with a specialization in archival management, and joined the staff of the Birmingham Public Library the next year.

Bibliography:
The Bearing Day Is Not Gone : The Seventy-Fifth Anniversary History Of Independent Presbyterian Church

Mission By The River : The Beginnings Of Kirkwood

One Great City : The Campaign For Consolidated Government, Birmingham, Alabama, 1970-1971

The Problem Of Authority In Early American Methodism : 1773-1787

Religious Literature In Virginia, 1685-1786 : A Preface To A Study In The History Of Ideas

The Shepherd And The Sheep : Reflections On An Image And Its Place In The History Of Early American Methodism


Next time you're in the Archives and you get a chance to marvel at a few of its many treasures, remember Dr. Whiting and know for a certainty that one human being can change a community.

Anonymous said…
BPL, Birmingham and indeed all of us who knew him have lost a treasure in Dr. Whiting, but Marvin will live on in his enormous legacy as well in the hearts and memories of those of us who came in contact with extraordinary, humane and gifted man.

Anonymous said…
I miss him. What a wonderful man he was. I wish he were still with us.
7:25 PM