Review: This Book Is Overdue! 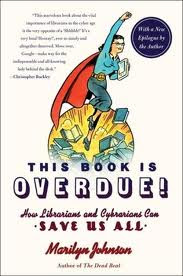 This Book Is Overdue!
How Librarians and Cybrarians Can Save Us All
by Marilyn Johnson

Marilyn Johnson loves libraries, and she isn’t shy about saying it. From Deadwood, South Dakota to New York City and the strange back-alleys of cyberspace, Johnson explores the far corners of the library universe to find out just how far we’ve come since the days of card catalogs, dusty shelves, and people saying “Shh.”

What she learns first is how the Information Age has overturned all the old assumptions of the library profession. While at first librarians may have feared the computers that threatened to supplant them, a new breed of librarians have dived head-first into the electronic realm, becoming educators and activists for a planet now drowning in information overload.

She concludes by speculating that the idea of a library as something that serves a narrow geographic area – a county, a city, a neighborhood – is becoming a thing of the past as the Internet makes borders and distance meaningless. By preserving vanishing pieces of history, defending the public’s right to information and privacy, and making knowledge freely available to all, every library out there, no matter how small, is a benefit to its community and the world.