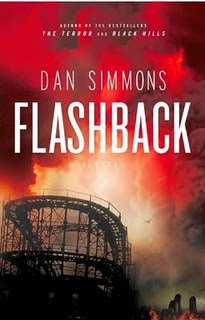 I first became aware of Dan Simmons years ago when I read Summer of Night, a horror novel about some teens in the 1960s who band together to make a stand against an evil that returned to their small town. (Well, I'll be, this sounds like the plot of many a horror novel—good or bad). As horror novels go, it was an OK read, reminiscent of Stephen King’s It, but without the charismatic Pennywise.

His next two horror books I read—Carrion Comfort and Song of Kali—knocked my socks off. Carrion Comfort is the chilling story about privileged “mind vampires” who use the Ability to control and use people for entertainment purposes and net gain. This book contains one of the most unconscionable characters I’ve ever come across: an elderly woman named Melanie Fuller who thinks that humans are disposable if she just happens to need their minds—men, women...children. Song of Kali is one of Simmons’ most talked-about horror stories. It takes place in crowded and sweltering Calcutta, and the tension is palpable from the start as a writer takes his wife and baby along on a magazine assignment to interview a poet named M. Das, who eight days earlier was a bloated corpse brought back to life by a statue of Kali. You'll be fidgeting in your easy chair as the journalist tries to get his family out of Calcutta before tragedy befalls them.

I have big plans to one day read Simmons' The Terror and Drood, coming in at 769 and 777 pages, respectively. I just need to set aside a big chunk of time to do so.

Flashback, Simmons' latest book, is a mixture of horror, scifi, and thriller, all genres that Simmons has written in before. Flashback takes place some twenty years into the future where the world is in political chaos and global economic meltdown. People are addicted to flashback, a substance that allows you to escape from the present and back to the warmth and safety of your best memories. Detective Nick Bottom became addicted to flashback after losing his wife in a car accident, and has since lost his job and son as a result. But he has a chance to redeem himself and the future when a Japanese governmental advisor hires him to re-examine the cold-case death of his son, a case that Bottoms himself worked on six years earlier.

I normally steer clear of dystopian novels because they're just too bleak and don't remove themselves far enough from reality, the way a vampire or werewolf story does. But I like Simmons' style and, besides, he's promised that this would be his only dystopian novel.

If you're interested in learning some in-depth background on Flashback, don't miss this Q&A newsletter on Simmons' website.
By Tressa Fancher

jaclyn hogan said…
Dan Simmons is wonderful. The Terror is my favorite of his novels, a wonderful mix of history and monsters. I thought Drood fell flat, but many of my friends enjoyed it.
11:18 AM

Tressa Fancher said…
Jaclyn, I tried tackling The Terror on audio, but just couldn't get into it. I think I might have fared better if I had tackled the book, which I still will do one day because I'm a big horror fan.

Have you read Carrion Comfort or Song of Kali? If not, you should. I think you might also enjoy the "monsters" in those. He is really great with character development and atmosphere.
7:56 AM