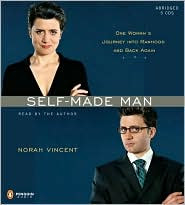 Immersion journalism has lifted the veil many times. In Black Like Me, Caucasian John Howard Griffin “became” a black man in the segregated South too see what it was like from the other side of the wall. Many years later, an Israeli Jew passed as a Palestinian in order to appreciate Arab reality in the Occupied Territories. Norah Vincent has tried something less noble, perhaps, but every bit as personal in Self-Made Man: One Woman's Year Disguised As a Man. She lived as a man for a year and a half (even the book’s subtitle underplays her role). The book is far more than a mere stunt in any commonly-understood sense. For one, Vincent didn’t do it to gain attention (at least not while she was living as a man). Of course, publicity would have blown her cover. In the sense that what she did was “an unusual or difficult feat requiring great skill or daring (Merriam Webster)”-yes, the book qualifies as a stunt. But that definition is only a sliver of the account here.

Starting out was comparatively easy when you know what Vincent would do later. She changes her name to Ned, gets a flat top haircut, buys glasses to accentuate the angles of her face, gets a makeup artist to help her fake a beard, forces her body down, in, and out where it counts, changes her clothes and goes to Juilliard to learn how to talk like a man, forcing herself to “pronounce with terse authority.” She does all this to be safely stereotypical, reasoning that she can’t afford to take chances.

Unlike transvestites or transsexuals who find relief in living as members of the opposite sex, tomboy Vincent gets no such pleasure. Being a man was, uhm, a drag, almost entirely. But being a man in rare specific situations could be psychologically fulfilling. In the course of the book Vincent joins a bowling team, hangs out at strip clubs, joins an all-male high-pressure sales team, lives in a monastery and embraces an Iron John-like men’s group.

The bowling team chapter has high risk and real rewards. The white, working class guys didn’t know what to make of Ned the lousy bowler. They kid him in ways that Ned is hurt by at first but slowly realizes are a form of tough love. After almost eight months, she comes clean and spills her gender on them. What she was terrified of doesn’t happen: they don’t beat her up. In fact, when they get over the profound shock, they decide to keep her as a friend. Vincent treasures her hard-won pals but despises her deception.

The strip club chapter is depressing and scary. The only democracy here is that both genders get emotionally brutalized.

In dating, Vincent allows that “girls don’t behave any better under relational duress and the centuries of subjugation haven’t made women morally superior.” Now that’s a post-feminist statement. She also discovers how profoundly vulnerable men are when they date. Here and elsewhere, Vincent’s painful constrictions in the male role are paradoxically broadening, even liberating.

More ego-pounding happens in the monastery. It’s the most exclusively male place Ned visits, and it brings perhaps the highest risks since he had to be “on” 24/7. Her insights here are characteristically full of empathy and compassion:

They wanted to be among their own kind, to be understood and left mostly alone to go about their business without a hectoring wife bearing down on them. But, and this was crucial, they didn’t want to be lonely.…But therein also lay the rub.…The nurturing influence that women could provide, the communicative skills they could lend and foster were lost to these men, and much to their emotional detriment.

Even among men who’d supposedly forsaken the world there was, unsurprisingly, a pecking order. And Brother Crispin was at the bottom of it, largely because he could occasionally get very emotional. Apparently, the last here was not the first. Ned befriends Crispin and also Brother Jerome, who declares, “You’ve brought emotional awareness and the possibility of change….We need that.” But almost all of the brothers were very uncomfortable with Ned expressing his emotions, which of course he did very guardedly indeed. Why? Vincent “feels they took refuge in machismo because they feared inappropriate intimacies between men.” Which is ironic because a couple of the brothers are, to Ned at least, obviously gay but, of course, celibate. As in the bowling chapter, Ned reveals Norah at the end, but in this case only to a couple of the brothers. This is powerfully dramatic, of course, but I wanted her to make a clean getaway because I thought that this might have made for even more effective drama.

No rest for Ned as he goes straight to work a testosterone-filled sales company. These guys (and they’re all guys, except for [including?] Ned) are like the proverbial hamsters on a wheel, forever chasing higher sales quotas that will lift them above minimum wage, according to the shiny promises touted by the company. There’s phoniness here on Ned’s part, too: “At the end of the day I gave my earned cash [away]. I didn’t want anything to do with it.” Really needing the money would’ve have made this chapter much more valid. But even here, there are worthwhile bits, such as the scattered seconds when Ned’s disguise unintentionally fades:

Vincent concludes her undercover tale with a stint in a men’s consciousness group. These are men tired of “holding up the world,” a position that wasn’t just “painful and tiring, it was also one of the most vulnerable poses a man could assume.” Here men were exhausted from rescuing and protecting women, a job that sometimes made them resent women. The invented initiation rituals the men put themselves through are embarrassing, even laughable, but I sympathized with these guys who had needs like open wounds. Their ultimate goal was to liberate men and women from the patriarchy which they feel that men as well as women had created.

Leaving Ned was an immense relief. Vincent dreaded “being found out as less than a real man, and I suspect that this is something a lot of men endure their whole lives, this constant scrutinizing and self-scrutiny.” Trust me, they do. The men Ned hung out with are obsessed with sex, competing, and hazing. (No wonder they needed women). But Vincent mistakes her experiences for the whole male world, which is a lot more various than this. Does it even need to be said that not all men are stereotypically male? Vincent goes on to say that “there is at bottom no such thing as that mystical unifying creature we call a human being, but only male human beings and female human beings, as separate as sects.” That’s a monolithic statement. What about intersexed or transgendered people? They more than blur this line, to say the very least. And hasn’t Vincent read Jung?

Did Ned get access to more power when she joined the patriarchy? No. It was “much more like joining a subculture than a country club.” Like the character Tootsie in the movie, Vincent comes to have an “inescapable empathy” for what was no longer the opposite sex. But the strain of the role catches up with her. She can no longer maintain two opposing ideas in her self and it finally “shut[s] down” her brain. When I read this I vaguely remembered that Vincent had written a subsequent book. Sure enough, Voluntary Madness is about how she tried to put herself together after the breakdown that Self-Made Man caused. Anything for a story. But, seriously, I need to thank Norah Vincent for her many valuable insights in this book. She’s taught me a great deal about men and women. Her occasional defects matter little compared to the generous amount of good sense and even wisdom here.

Hunter said…
Genius, Richard. You've given us another gem of a review. Thanks for writing it.
11:38 AM