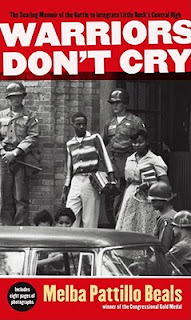 The memoir of Melba Pattillo Beals tells of 1957 when nine African American students became the first to integrate Central HS in Little Rock, Arkansas, where they were met with harassment, name calling, and physical attacks on a daily basis, yet were told not to resist or retaliate to avoid further dissension.

These nine students, one senior and eight juniors, were selected to integrate based on their grades and performance at their former segregated high school. Because of the Supreme Court Brown v. Board of Education decision in 1954 that outlawed segregation, the local chapter of the NAACP selected Central HS to integrate, an act which was met with instant opposition from Arkansas Governor Faubus. Picking up on the Governor’s segregationist agenda, students and their parents devised a wide variety of bullying tactics, from spraying ink on the clothes of the African Americans to following so closely that their heels were bloodied, stabbing them with sharp objects, pushing them down stairs, spitting on them, and using racial slurs with all kinds of threats attached.Their families were threatened, Melba’s mother almost lost her job, and their phones rang continually with obscene remarks and promises to kill them. Although eight of the nine made it through the school year (Minnijean was expelled but was sent to attend a private school in NYC), the high schools in Little Rock were closed for the next three years and Melba was eventually sent to live with a family in California to finish her high school education.