Book Review: Made In America: An Informal History of the English Language In the United States 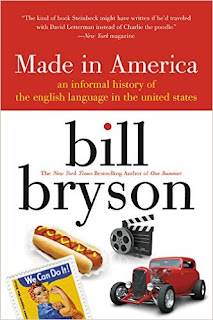 Made in America: An Informal History of the English Language in the United States
Bill Bryson

I delayed reading Made In America for years because I’d already read Bill Bryson’s The Mother Tongue, a history of English in Britain. I assumed, even after skimming bits of Made, that it’d cover too much of the same territory. Once again, I underestimated Bryson. It of course has been wholly absorbing and stimulating to read. And not quite what the title, or the book’s subject headings, indicates. At least half the book is an unconventional history of America. True, Bryson says you have to know the social context to understand American English, but he uses this as a springboard to write that history of his native land he must’ve always wanted to. He drives a truck through this premise and I was glad to be a passenger.

And because this is a Bryson take on our history, you get a gadfly approach, a revisionist plea, a wandering look. That’s what I expect of Bryson once he gets into history and he can do this all he wants and I’m thankful. He is like, as the cliché says, the history teacher you liked best (and, if you had one, the History of English teacher you liked best). Bryson has a gift for explaining that one fact that illuminates a whole area that you didn’t even realize you incompletely understood. Case in point: in the section on pre-Columbus visitors to the New World, the author makes it clear that getting here wasn’t as near-impossible as you may have thought. “It would be possible to sail from Scandinavia to Canada without once crossing more than 250 miles of open sea.” Very, very difficult to get here it was. Just not as difficult as I thought. Which explains why so relatively many came.

One of the chief wonders of the book is all the obsolete versions of modern day words scattered throughout. Many of these have a richly antique, or just pleasantly strange, sound to them (and some could provide the framework for a steampunk novel or two). Newfoundland, for instance, used to be called Norumbega. Some of these notable words are listed in the left column below, while the current version is listed in the right column.


You may have noticed old Spanish place-names in the list above. This brings up one of the most light-shedding things the book has to offer: the preponderance of such place-names in North America’s past. The French left their cultural mark on our geographic designations, but “No less a mark was made by the Spanish…Spain’s American dominions at one time stretched across most of the continent.” We forget this because of the smaller number of place-names remaining and because they are mostly west of the Mississippi. Because of this distorted lens, we minimize Spanish influence on our land. And don’t get Bryson started on Native American place-names.

Because he’s such a one for turning tables over, Bryson sometimes errs too much on the side of revising, as when he claims that the American Revolution came “not to secure America’s freedom, but to preserve it.” Or asserting that George Washington “was not a gifted military commander.” Or dismissing the Boston Massacre (overblown and mostly the Yank’s fault). Maybe Bryson’s lived in Britain too long. Jean de la Bruyere famously said that the opposite of what’s generally believed is what is often the truth. Often, maybe, but not usually. Sometimes Bryson sins are those of contextual omission, as when he mentions that, by the early 1800s, slavery was “widely detested in the North” and largely omits the fact that some slavery existed in the North at this time. But, in fairness, he does show that, pre-Civil War, free blacks in the North were hardly free in any meaningful since. Bryson’s openness to newly discovered facts and interpretations usually gives you a fresh, vital, and exciting take on American history and language. Because of this we learn that "stiff upper lip" is an Americanism, that the Victorian practice of covering up piano legs in little skirts is ”unverifiable,” and that panties once “signified undershorts for males.” Bryson lets us know that the notion that most of the immigrants who came here learned English quickly is largely a myth. In the late 19th and early 20th century, “It was possible—indeed, in some cases not unusual—to live an entire life in the United States and never use English.” Bilingual Americans were very common in this era (as they are today). Even Norwegians had forty papers in their own tongue. One reason we think so many Americans have British origins is because so many last names are British (or British-sounding). This is something I knew, but I didn’t fully realize the massive amount of Americans who changed their name to erase their ethnic origins, something they largely wanted to do so they could fit in (or avoid discrimination), and this has vexed genealogists and historians ever since. Like the place-name Anglicizations we’ve seen before, this is another way in which, for various reasons, we’ve homogenized the past in America.

And on it goes, this reassessment, this re-envisioning of America, as Bryson opens us to the fact that early roads in our land were simply trails, the beginnings of the bias against mass transit (much later than you might suspect), how L.A., of all places, had the first public transportation system in America. And that the Colonial Era Indians had a far healthier diet than the Europeans. By the way, “succotash, clam chowder, hominy, cornpone” and very many more familiar dishes were all Indian dishes. Even these food names were, in many cases, corruptions of Indian ones. We learn that American trains used to be much better than European ones. We learn that Piggly-Wiggly was the first self-service grocery chain and that shopping centers were originally intended to slow suburban sprawl and that “Until the early 1800s the average American home existed in near total darkness once night fell.” Sponsors used to not just advertise on radio programs but actually write them. Products such as “aspirin, linoleum…thermos…lanolin, celluloid, dry ice, escalator…and zipper” used to be “capitalized and worth a fortune” but they lost their trademark protection.

These surprising facts weren’t usually discovered by Bryson, but he has a genius at assembling them, getting them to hum, so as to trigger fascination and wonder. And, as with any Bryson book, there’s much more where these came from.

Let me leave you with a couple of items that Bryson trots out. One is an account of the sexual misery the Puritans inflicted on early colonists as well as how, even in the mid-20th century, Puritan writings required “heavy editing,” so profane were their content. No wonder we’re so confused. The end chapter contains the most sensible analysis of political correctness I’ve ever read, something of a miracle. And Bryson, though he doesn’t have our 20-years-later perspective, helps me to more fully understand that that Puritan confusion really does play out in political correctness today. PC is, among many things, a direct descendent of Puritanism. Thanks for the insight, Bill. Not bad for a gadfly.
By Tressa Fancher