What: Author visit and book signing by William "Billy" McDonald III, author of The Shadow Tiger: Billy McDonald, Wingman to Chennault
When: Thursday, November 10, 1:00-2:00 p.m.
Where: Central Library, Linn-Henley Research Library, Arrington Auditorium, 4th floor
Details: Books will be available for purchase and at the event

As a young child, William “Billy” McDonald III heard his father share fascinating tales of his adventures as a World War II fighter pilot for the United States. Now thanks to determination—and some luck—McDonald is sharing the story with the world through the publishing of a book that his father first started 52 years ago.

McDonald recently co-authored The Shadow Tiger: Billy McDonald, Wingman to Chennault along with Barbara L. Evenson. In honor of Veterans Day, he will hold a talk about his dad, a World War II aviation hero from metro Birmingham, on November 10 at the Central Library.

Read more about the book, tapped as Southern History's Book of the Month in October, at the link below:
http://bplolinenews.blogspot.com/2016/10/southern-history-book-of-month-shadow.html

All 19 locations of the Birmingham Public Library will be closed on Friday, November 11, in honor of Veterans Day and to celebrate the life and sacrifices of military heroes like Billy McDonald.

The Shadow Tiger covers a fascinating period in aviation and world history through the eyes of the young flyer, Billy “Mac” McDonald. The book has over 500 images, including photos, letters, documents, and maps. Through these, McDonald tells his own story, detailing the ordinary and extraordinary adventures of his life, says his son, William C. McDonald III.

The book also reflects a personal journey for McDonald’s son and his family. McDonald’s son spent five years organizing and selecting items from the family archives, talking to those who remembered his father or the era, and researching in books, articles, online, and in archives. He then drafted a 600-page manuscript.

Billy McDonald III, in an interview, said that his father originally wanted to write a book about his flying adventures in 1964. After his father suffered a medical ailment that left him unable to talk in 1977, it looked like the book would never come to fruition. But in 2010, McDonald’s sister discovered in her basement a box containing thousands of his father’s personal letters and journals. Many were wet, and McDonald painstakingly dried out the letters, and over the course of five years put them together in a book which eventually became The Shadow Tiger, released in September 2016.

In China, he moved from instructor for the Chinese Air Force to combat pilot flying Chennault’s legendary Hawk 75 Special against the Japanese over Nanking in 1937. He began by ferrying world-famous passengers like Hemingway and high-value cargo like gold for the China National Aviation Corporation and then flew gasoline and gunpowder over The Hump (Himalayas) for Chennault’s Flying Tigers and the Chinese Army. Through it all, controversial and legendary aviator Claire Lee Chennault remained his mentor, often his boss and always his friend, indelibly shaping his life, explains the author. 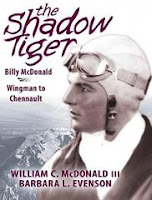 Co-author Barbara L. Evenson spent over a year helping edit, organize and produce the book, which she believes is “the most complex and fascinating narrative I’ve worked with in 40 years of publications experience.”

“The Shadow Tiger is the story of a remarkable career, and a man who bore witness to some of the twentieth century’s historic events and pivotal characters,” Evenson said. “McDonald tells us the tale in his own words through newly discovered photos, correspondence, and manuscripts, making this book both a primary source for researchers and a thrilling tale of adventure for readers.”
By Tressa Fancher