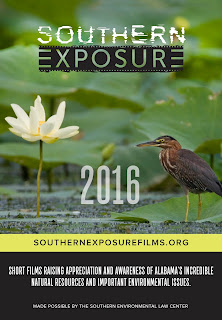 Southern Environmental Law Center has donated each of BPL’s 19 locations one DVD copy of the 2016 edition of Southern Exposure, a series of documentary shorts on various Alabama environmental topics by independent filmmakers. Read more about the films at www.southernexposurefilms.org. A year ago, SELC and Black Warrior Riverkeeper donated 57 DVDs, copies of the 2013, 2014 and 2015 editions of Southern Exposure.

Charles Scribner, executive director of Black Warrior Riverkeeper, said his organization and SELC’s Birmingham office are honored to donate the 2016 DVDs to BPL as an avenue for educating the public. Scribner said partnering with BPL makes Southern Exposure available to many more people.

“Clean water and air are necessities for all, but not everyone has an Internet connection for watching Southern Exposure online,” Scribner said. “Now, everyone can borrow the DVDs for personal viewing or an event with their friends, family, church, school, or civic organization.”

“Throughout the past five years of the Southern Exposure Film Fellowship, these compelling films have been incredibly effective in raising appreciation for Alabama's natural resources and in bringing some of the most urgent environmental issues facing our state into focus," said Keith Johnston, managing attorney of SELC's Birmingham office. "By making the 2016 Southern Exposure films available to the public throughout the Birmingham metro area, we are thrilled that the Birmingham Public Library will continue to educate, entertain and energize our citizens to take action on behalf of Alabama's environment."

Sandi Lee, interim director of BPL, said the 19 libraries in the system are appreciative of the donation, and honored to be a resource to help educate the public about Alabama’s natural resources.

Southern Exposure is a film fellowship program that is actively raising awareness about Alabama's incredible natural resources and important environmental issues that impact all Alabamians, Scribner said. Now in its fifth year, the innovative summer fellowship brings emerging filmmakers from across the country to tell authentic, engaging stories through short documentary films about Alabama's environment and the people who cherish it, from the mountains to the coast.

Sponsored by the Southern Environmental Law Center and made possible through the support and partnership with environmental and conservation groups across the state, Southern Exposure fellows have the opportunity to create inspiring, captivating films that give viewers a sense of how much Alabama has to offer and the importance of protecting its resources.

As a result of these poignant stories depicting the triumphs and challenges facing the state, numerous films from past fellowship years have been selected for screening in juried film festivals around the country. Live screenings and online distribution of the films continue to reach a variety of audiences, in Alabama and across the nation, helping Southern Exposure fulfill the mission to spread awareness, appreciation and inspire action on behalf of Alabama's environment.

The Southern Environmental Law Center is a regional nonprofit using the power of the law to protect the health and environment of the Southeast (Virginia, Tennessee, North and South Carolina, Georgia, and Alabama). Founded in 1986, SELC's team of nearly 60 legal and policy experts represent more than 100 partner groups on issues of climate change and energy, air and water quality, forests, the coast and wetlands, transportation, and land use. Get more details at www.SouthernEnvironment.org.
By Tressa Fancher