Southern History Book of the Month: Dead Towns of Alabama 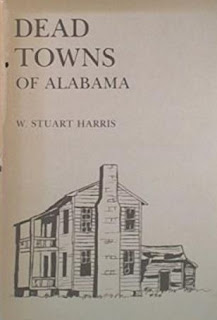 Despite the gloomy-sounding title, W. Stuart Harris’ Dead Towns of Alabama is a lively history of our state’s villages, forts, and other communities that have been depopulated through various circumstances such as war, forced relocation of their inhabitants, natural disasters, financial crashes, or simply the inevitable march of time. The book was originally issued for the American Bicentennial observances in 1976 under the auspices of the Alabama Bicentennial Commission, and now that celebrations of the upcoming Alabama Bicentennial are about to begin, this is an excellent time to take a look through Dead Towns. It lends itself well to browsing; you can open it just about anywhere for a brief history of a vanished community.

Take the mysterious Maubila (also spelled Mabila or Mavila), where the Hernando DeSoto expedition met in battle with Chief Tuscaloosa:


The site of one of the most exciting encounters in Alabama history, the Battle of Maubila, is unknown. Although historians and archaeologists have searched for it for well over a century, Maubila continues to elude them and remains as mysterious as ever . . . The final report of the United States DeSoto Commission, submitted to Congress in 1939, conceded that the elusive site was probably somewhere in southern Marengo County.

However, the ruling of the Commission has not stifled speculation on the exact site of Maubila, with other guesses placing it in Clarke, Wilcox, or Greene County. It’s enough to bring out the Indiana Jones in just about any armchair archaeologist.

Another section is dedicated to communities around Alabama forts, and any child who took Alabama history is likely to recall the bloodcurdling story of the Fort Mims Massacre. But there were also two Fort Deposits—a surprise to me, since I’d only heard of one. I had also never heard of Fort Easley, which was apparently evacuated as a direct response to the events at Fort Mims.

In the list of Colonial, Territorial, and State towns that are no longer occupied, we have—surprise!—Birmingham. But this Birmingham was located in Jackson County and was created in 1845. Without a railroad system nearby, the community declined after the Civil War. Or there’s Cahaba/Cahawba, the first state capital of Alabama, though I couldn’t help thinking of it as “the town that couldn’t catch a break” as I read the entry. Flooding of the Cahaba River and the economic changes brought about by the Civil War forced this original state capital into obscurity: "Just before the turn of the century, a former slave purchased most of the town site for $500, and the abandoned homes and buildings were razed for building materials and transported by steamboats to Selma and Mobile."

These are only a few of the “ghost towns” that live again in the pages of this guide, which includes a listing of the towns by county. I was interested to see that at least one of these former communities is right along my daily drive to work. You may discover some interesting traces of the past in your own back yard as well. If you’d like to brush up on your Alabama history, this is an entertaining place to begin.

The Search for Mabila: The Decisive Battle between Hernando de Soto and Chief Tascalusa

Birmingham, As It Was, in Jackson County, Alabama
By Tressa Fancher