Book Review: The Discovery of France: A Historical Geography from the Revolution to the First World War 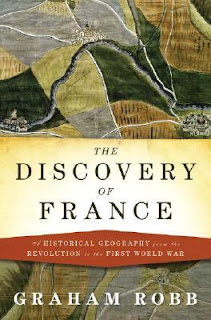 The Discovery of France: A Historical Geography from the Revolution to the First World War
Graham Robb

Graham Robb is yet another romantic soul who swoons as he encounters traces of the lost historical worlds of France. For most of French history, as described in Robb’s Discovery of France, only a small percentage of the people who lived within the current borders of France had any idea of France. As late as the First World War, less than half of French soldiers spoke French, or had heard of Charlemagne, Joan of Arc, or Napoleon.

The France that Robb describes, outside of Paris and away from the rich river basins, was that of more than a thousand mostly self-governing “pays” or “countries,” which would have different languages, customs, economies, and systems of measurement. They even waged war on one another. The size of a pays was often determined by the loudness of church bells—that is, how far they could be heard. The Catholic Church was always present, but it was primarily felt for its right to collect taxes. Most pays worshiped their own saints and believed Mary was the wooden statue in her local chapel. They rarely traveled or married out of their pays. These tribal communities in their remote valleys each may have been the remnant of one of the many invasions that have washed over France for thousands of years.

Robb also describes the destruction of this ancient world by the advent of the modern age. Railroads ruined many of the marginal local economies, and the national government began to exert more control, largely to muster armies needed to defend France. Villages adapted by sending their five-year-old boys walking on long journeys to live in Paris with other village boys to work as chimney sweeps, or to beg. Wagonloads of unwanted babies, five to a basket, were sent to Paris by communities that could not feed them.

Even today French is a second language for many of the French, but most of the ancient languages, the distinct daily tongues of hundreds of small “countries,” are now extinct. The automobile, radio, and TV nearly finished the job begun by the railroads. But traces remain.

Charles De Gaulle once asked, “How can you govern a country that has 246 varieties of cheese?” On reading Robb, we may ask, “Only 246?”
By Tressa Fancher