ALA Apologizes for Silence on Segregated Libraries Issue


On Sunday, June 24, 2018, renowned national library historian Wayne A. Wiegand and his wife, Shirley, appeared at the New Orleans Public Library’s main branch to discuss their new book, The Desegregation of Public Libraries in the Jim Crow South: Civil Rights and Local Activism. Wiegand (pronounced Wee-ghund) is on a nationwide lecture and book-signing tour promoting the book. Wiegand has a chapter detailing the 1963 sit-ins by Miles College students that led to the desegregation of the Birmingham Public Library.


The Wiegands’ New Orleans talk, “Hidden Figures in American Library History,” included a panel discussion with four blacks whose protests of segregated libraries in the Deep South are featured in their book. It was timed to coincide with the American Library Association (ALA)’s 2018 Annual Conference held in New Orleans June 21-26.

ALA’s board released a resolution apologizing for its failure to speak out against the racist Jim Crow laws that kept many public libraries segregated until the 1960s. The resolution reads in part:


“Whereas, despite the work of African-American librarians . . . and the allies who stood with them to proactively fight segregation, a large majority of the nation’s library community failed to address the injustices of segregated library services until the 1960s.

“Whereas a genuine apology is an important and necessary first step in the process of reconciliation, resolved that the American Library Association


Wiegand, who worked with ALA on the resolution, applauded the group for taking a step he says is long overdue. His passion about the segregated library issue was evident on May 1, 2018, when as part of the book tour he captivated a large audience at the Birmingham Public Library’s downtown location by sharing details of young black heroes whose brave stands led to the integration of public libraries in former Jim Crow southern cities like Birmingham.


Former federal judge U.W. Clemon, retired radio broadcaster Shelly Millender, and Jeff Drew, whose late mother Deenie Drew were among the blacks whose sit-in led to the desegregation of the Birmingham Public Library in 1963, participated in a panel discussion during the event. Wiegand’s book lecture in Birmingham was sponsored by the Alabama Humanities Foundation and Patrick Long in memory of Patricia Long, librarian and educator.

Wiegand said the desegregation of the Birmingham Public Library in 1963 was inspiring considering it was the same year police commissioner Bull Connor gave the city a black eye with his violent response to black civil rights protesters in Birmingham.


“The fact the library became integrated peacefully in the middle of that violent summer is kind of lost on people,” Wiegand said. “It was the sole site of racial conciliation in the middle of a town that was hosing African-Americans and turning dogs on them. The media, of course, looking constantly for photos and images that attracted attention, paid no attention to the integration of the Birmingham Public Library. So it kind of got lost in history.”

Wiegand, a retired professor considered the “Dean of American Library Historians,” is also author of Part of Our Lives: A People's History of the American Public Library. He hopes The Desegregation of Public Libraries in the Jim Crow South gives proper recognition to the brave heroes who integrated an important American institution—public libraries.

“What I hope is this can inform a number of people to recognize that public libraries had a role in the civil rights movement and there are certain systemic racist practices that are built into library practice, in part because they have not come to grips with their past on the issue of race,” Wiegand said. “We hope this stimulates a discussion in the library profession about what they have done on the issue of race and reflect on that.” 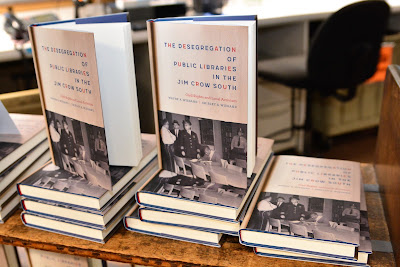 Here is a link to the book description from Wiegand’s publisher, LSU Press:
https://lsupress.org/books/detail/desegregation-of-public-libraries-in-the-jim-crow-south/
By Tressa Fancher