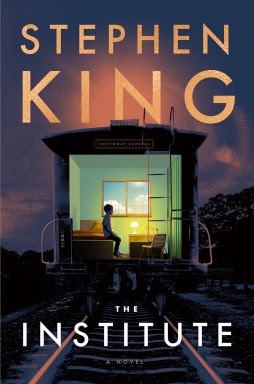 Barry Crane Library Assistant III- Adult Services |Springville Road Regional Library
The Institute by Stephen King is reminiscent of some of his earlier works like Carrie, The Dead Zone and Firestarter which focused on characters with paranormal psychic abilities like precognition and telekinesis.
It resembles Firestarter (the story of a young girl on the run from a clandestine government agency trying to create psychic soldiers) in so many ways that it could almost be a sequel.
The plot of The Institute revolves around a young boy with psychic abilities who is kidnapped from his home by a clandestine government agency and taken to a secluded facility where he and other children with similar abilities are subjected to brutal testing and dosed with experimental drugs that enhance their psychic powers for the purpose of weaponizing them for use as remote assassins.
I don’t always finish reading a book once I’ve started if I’m not entertained. But Stephen King is a master storyteller and even though this is far from his best work and derivative of his earlier fiction, it was entertaining enough to make it worth the time I spent reading the book.
You can check out The Institute by Stephen King at Jefferson County Library Cooperative member libraries, including the Birmingham Public Library, by clicking here.
Check out Firestarter at JCLC member libraries including BPL by clicking here.
By Roy L. Williams