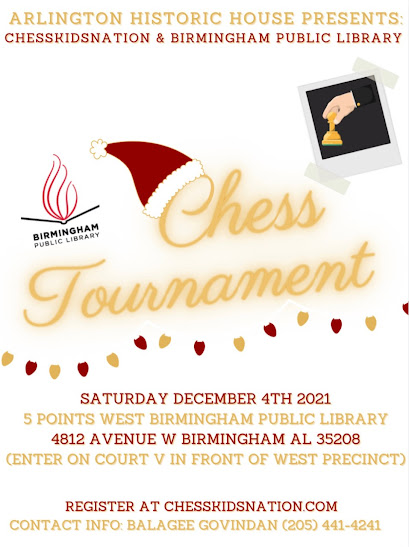 Birmingham, Ala. - Forty of metro Birmingham’s most talented young chess players will be face off this Saturday, December 4, at the Five Points West Regional Library.
Presented by the Arlington Historic House, the ChessKidsNation/Birmingham Public Library Chess Tournament will kick off at 9:00 a.m. and conclude at 5:30 p.m. at Five Points West Library, 4812 Avenue W.
The organizer is Balagee Govindan, who founded ChessKidsNation in 2005. Coach Balagee said he is excited as due to the pandemic, this is the first in-person ChessKidsNation tournament in two years.
ChessKidsNation is a nationwide chess teaching establishment staffed by trained chess coaches who aim to promote chess among young people across the country. Coach Balagee is United States Chess Federation Certified Chess Coach and Tournament Director. He is also a FIDE National Instructor (need to know what FIDE stands for).
Coach Balagee said the OTB (Over The Board) Chess Tournament is open to any age group of players. The Scholastic Division will have four sections of players from Kindergarten through 12th grade. Open and Reserve Sections will have players who are Rated U1600 and 1600+.
Winners of the Open and Reserve sections will receive cash prizes for First, Second and Third Place. Participants in the Scholastics division will receive medals for the Top 3 players.
Coach Balagee said ChessKidsNation was able to partner with the Birmingham Public Library thanks to one of his former students, Devin Hudson, 22, who is assisting with the Saturday event.
“ChessKidsNation is planning to hold a quarterly in-person chess tournament at the Birmingham Public Library so all local talents will have an opportunity to play chess,” Coach Balagee said.
Chess is growing in popularity in the African American community, especially among young boys, as a way to relieve stress (read this article: Teaching Black Kids Chess to Relieve Stress)
Devin said he has seen personally the positive impact chess had on his life and other young Black boys. He started playing chess in the fifth grade.
“My involvement came with my general love for the sport,” Devin said. “When I became the chess coach at i3 Academy Middle, I wanted to build a stronger chess community and I started by reaching out to Mr. Govindan who was really accepting of me and the collaboration and I am very thankful for him.”
As a chess coach, Devin said the lessons he emphasizes most is the trade-offs strategy chess players learn.
“In chess, one important strategy is trading less valuable pieces for more valuable pieces by capturing,” Devon said. “This is a development in decision-making which is a skill that I think young African-American children can benefit from. Being able to think critically, develop strategies and make good decisions is what I try to expose them to. This is one of the reasons that chess is important to me.”
For more details and a free online chess evaluation, email contact@chesskidsnaton.com or click here below https://chesskidsnation.com/assessment/
You can follow ChessKidsNation at the links below:
Website: www.ChessKidsNation.com
Whatsapp: https://wa.me/12054211523
Facebook Page: https://www.facebook.com/ChessKidsNationChessClub
Facebook Group: https://www.facebook.com/groups/ChessKidsNation
Youtube: https://www.youtube.com/ChessKidsNation
Instagram: https://www.instagram.com/chesskidsnation
Linkedin: https://www.linkedin.com/company/chesskidsnation
By Roy L. Williams