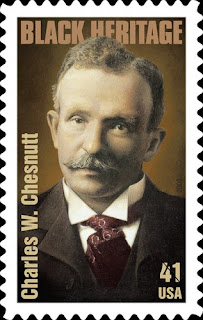 The United States Postal Service and the Birmingham Public Library will celebrate Charles W. Chesnutt as the 31st honoree in the USPS' Black History Heritage Series.
Charles W. Chesnutt, a recipient of the NAACP's Springarn Medal for outstanding achievement, was a critically acclaimed African-American author and activist. Working alongside prominent figures such as W. E. B. DuBois and Booker T. Washington, Chesnutt became one of the era's most prominent and outspoken commentators on African-American life, and his talents as a fiction writer, essayist, and activist contributed to the flowering of the Harlem Renaissance.
Born in Cleveland, Ohio, in 1858 to free Negro parents (the fathers of both his parents were white), Chesnutt could pass for white but chose instead to honor his African-American heritage. Chesnutt was one of the first African-American writers of fiction to receive serious acclaim for eschewing the condescending characterizations and nostalgia for the antebellum days of slavery in the South. His stories are rich with symbolic imagery that highlight the brutality of the South's former slave system.
Chesnutt's first two books were the short story collections The Conjure Woman (1899) and The Wife of His Youth and Other Stories of the Color Line (1900). Stories such as "The Wife of His Youth" and "The Sheriff's Children" deal with the unjust social treatment resulting from miscegenation. In 1899 his biography of Frederick Douglas was also published.
At the time his three novels were not critically acclaimed and were not commercial successes, in large part because they were deemed too controversial. The House Behind the Cedars (1900) is set in South Carolina and tells the story of an African-American woman who passes for white and how she deals with her suitors; The Marrow of Tradition (1901) is about the 1898 Wilmington, North Carolina, race riot and the affect it has on the white and mulatto branches of a family; The Colonel's Dream (1905) refers to a successful New York businessman's return to his southern hometown and his futile efforts to bring positive change during the Reconstruction era.
Wednesday, February 6, noon.
For more information on Charles Chesnutt's life and writings, visit the Biography Resource Center (library card is required).
Books not available for checkout may be borrowed through Interlibrary Loans.

Feed your body and mind at BPL's Brown Bag Programs. You bring the lunch and we'll bring the drinks. Wednesdays at noon in the Arrington Auditorium located on the 3rd floor of the Linn-Hinley Research Library, 2100 Park Place. There is no charge for these programs.
By Tressa Fancher