Staff Pick: Into the Wild 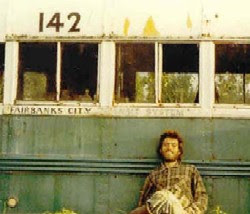 S.O.S. I NEED YOUR HELP. I AM INJURED, NEAR DEATH, AND TOO WEAK TO HIKE OUT OF HERE. I AM ALL ALONE. THIS IS NO JOKE. IN THE NAME OF GOD, PLEASE REMAIN TO SAVE ME. I AM OUT COLLECTING BERRIES CLOSE BY AND SHALL RETURN THIS EVENING. THANK YOU. - a note taped to the door of the bus

In April 1992 a young man from a well-to-do family hitchhiked to Alaska and walked alone into the wilderness north of Mt. McKinley. His name was Christopher Johnson McCandless. He had given $25,000 in savings to charity, abandoned his car and most of his possessions, burned all the cash in his wallet, and invented a new life for himself..."

I don’t know what I was doing in 1996 to make me miss this book the first time around, but I must've been just cruising along, living my motto of "So many books, so little time." I picked up Into the Wild when I recently revisited Jon Krakauer, and I knew vaguely about the movie version directed by Sean Penn that came out last year. I couldn’t put this book down until I knew how Chris McCandless died, and I’ve been haunted by his story ever since. No young man should have to die for his idealism, however naïve we feel he’s being.

After graduating from Emory University in 1990, Christopher McCandless left home to “disappear for awhile,” and his family had no idea of his whereabouts until they were notified of his death two years later. He shook off his upper-class trappings and roamed through several states, first in his trusty yellow Datsun and then by thumb. His final destination was the Stampede Trail in Alaska, and his goal was to spend the summer in the bush, living off the land. He survived for 112 days.

When Krakauer published the story in Outside magazine in 1993, readers bombarded him with mail. McCandless was either hailed for his adventurous spirit and deified for his noble ideals, or he was branded a starry-eyed fool too stupid to survive in "the wild"--30 miles east from a major highway and 16 miles south from the main road into Denali Park.

Krakauer, an adventurer himself and a former self-absorbed, reckless youth, veers off for two chapters to explain why the young seek such extreme sports. A year after Krakauer graduated from college, he travelled alone to the Stikine Icecap region near Petersburg, Alaska, to climb the Devils Thumb. He looks back on his three weeks in Petersburg and acknowledges his hubris and an appalling innocence, not thinking about the affect his possible death might have on his family and friends. But he just couldn't resist "stealing up to the edge of doom and peering over the brink."

He comes down clearly on McCandless' side because he so readily understands this: "It is easy, when you are young, to believe that what you desire is no less than what you deserve, to assume that if you want something badly enough, it is your God-given right to have it." He understands it because he lived it. “In coming to Alaska, McCandless yearned to wander uncharted country, to find a blank spot on the map. In 1992, however, there were no more blank spots on the map--not in Alaska, not anywhere. But Chris, with his idiosyncratic logic, came up with an elegant solution to this dilemma: He simply got rid of the map. In his own mind, if nowhere else, the terra would thereby remain incognita."

McCandless’charm, intelligence, and enthusiasm endeared him to the outer fringes of society. The people he met on his journey--the commune dwellers, the employers, the drivers who gave him a lift and a place to stay for the short term--were all grateful for the time he allowed them to spend with him. They gave him money, their lunch, hunting gear, and advice. They begged him to call home, to stay and work, to come and live with them. But this just wasn’t part of his plan.