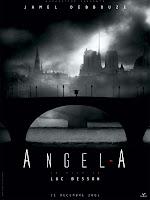 Fans of Frank Capra’s holiday film classic, It’s a Wonderful Life will not want to miss Luc Besson’s edgy update, Angel-A. It begins alongside the Canal Saint Martin in Paris as André (a short puppy-dog-faced grifter) is being beaten up by impatient gangsters over an unpaid debt of 40,000 euros ($57,200). Terrified and helpless, the vulnerable Moroccan-American trudges his way to Paris’s most ornate bridge resigned to end his misery by plunging himself into the Seine. Just as he settles on the ledge, he is startled to discover several yards away the presence of a very tall platinum blonde woman in a short black dress. Before he can catch his breath the mysterious woman jumps into the Seine. André dives in and rescues her and they develop a friendship. Soon André learns that his new friend, Angela, is an angel with no memory of her previous life on earth. Angela helps André reduce his debt and grasp new challenges that lift his self awareness and self esteem.

Similarities and differences both abound between It’s a Wonderful Life and Angel-A. Both are filmed in black and white. While both are based on the same basic premise, the character of Angela is much more worldly than her counterpart of Clarence. She chain-smokes like a stereotypical Parisian and gambles and turns tricks to help André reduce his debts. They bicker a fair amount but the viewer cannot miss how André is falling in love.

André is played by Jamel Debbouze, who is probably best known to many viewers as the grocery delivery man in the famous French film Amélie. Rie Rasmussen, a Dane who plays Angela, is remembered for her larger than life screen presence in Brian De Palma’s Femme Fatale. The cinematography is nothing less than breathtaking thanks to Thierry Arbogast, the same photographer that De Palma used in Femme Fatale.

Borrowing a Capra-esque premise sixty years after It’s a Wonderful Life could have resulted in a corny and trite film at best, but in the hands of this talented team headed by Luc Besson, a modern and memorable experience awaits the viewer. And, if you are already in love with the City of Light, you might never see it quite as lovely as revealed here.

David Lefton said…
I watched Angel-A the other night, and I can't stop recommending it to my friends! It is really beautiful. Each scene is a little snapshot of gorgeousness! The cinematography is amazing and the story, itself, is sweet.
12:05 PM