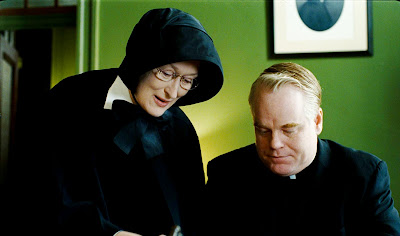 Father Brendan Flynn (Philip Seymour Hoffman) is right: Gossip is like feathers pushed by the wind. They are impossible to gather up and take back, flung far and wide, settling into corners, whispering into ears, inflicting their damage.

Sister Aloysius Beauvier (Meryl Streep) believes she knows the nature of priests, and is ever vigilant about any impropriety between a priest and a child. She tells her nuns to report anything suspicious, and the guileless Sister James (Amy Adams) does so in a moment of guilt-riddled suspicion, relaying to the Sister Donald Miller's trip to the rectory in the middle of class, and a whiff of alcohol on the frightened student when he returns. This is all the proof that Sister Aloysius needs to start the campaign to oust Father Flynn, a priest with long fingernails who is on his third parish and is bucking the strict nature of her principalship.

When Aloysius calls Donald Miller's mother (Viola Davis) to the school for a meeting, she is stunned by the mother's reaction to the news of her son's alleged molestation. A revelation about Donald's home life adds another layer of doubt to the situation.

Viola Davis was nominated for an Academy Award for her role as Mrs. Miller, even though she is in only two short scenes. She is more than deserving of this Best Supporting Actress nod. I have never before seen her act, but Davis holds her own with Streep and that can't be an easy thing to do. (Hoffman, Streep, and Adams were also nominated for Academy Awards.)

Depending on whom you choose to believe, the evidence either mounts as Doubt progresses or remains scant as ever. I waffled on Flynn's guilt throughout the movie, watching the reactions not only of the the first black student at the school—Donald Miller, the boy at the heart of the accusations—but of two other boys whose behavior around Flynn might raise a flag of caution. How much are we supposed to read into a flinch, a pulling away, and a wry smile?