Book Review: We Have Always Lived in the Castle 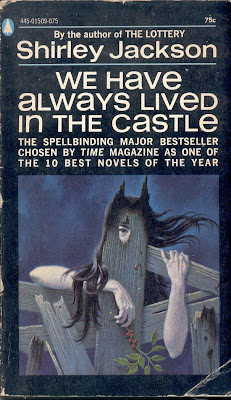 The taunting sing-song rhyme that children chant whenever a Blackwood sister is near is reminiscent of the “forty whacks” rhyme used to taunt Lizzie Borden. The Blackwood sisters, like the Borden sisters, are infamous in their town. Holed up in a big house, guarding their secrets, their seclusion adding to their sinister reputation with the passing years.

Right away we see that something isn’t quite right with Merricat. She introduces herself on the first page: Dislikes? Washing herself; dogs; and noise. Likes? Her sister, Constance; Richard Plantagenet; and the death-cup mushroom. "Everyone else in my family is dead."

The Blackwood family used to be a family of seven, but now it’s just the three of them: 28-year-old Constance; 18-year-old Merricat; and invalid Uncle Julian. The girls’ father, mother, brother, and aunt died after sprinkling their blackberries with a sugar and arsenic mixture from the heirloom sugar bowl.

Constance—like Shirley Jackson did—suffers from agoraphobia. So every Tuesday and Friday Merricat heads to town to do some shopping and borrow books from the library. There she endures the stares and confrontations of the townsfolk, who are seething with resentment from the elitism of Blackwoods past, and the injustice of the girls getting away with murder six years earlier.

Merricat spends her day practicing her brand of witchcraft, tending to the talismans that keep them safe: the box of silver dollars buried by the creek; the doll buried in the field; the book nailed to a tree in the woods. Their small family lives a quiet and content life in the "castle," until a cousin arrives and disturbs the already fragile OCD, black-magic world of Merricat, and opens Constance's eyes to just how bizarre their lifestyle is.

A short while into cousin Charles' stay an opportunity presents itself for the Blackwoods' neighbors to release the rage that has simmered for years. And in the aftermath, Jackson has her say about family loyalty, greed, and the good and bad in everyone. There are some tender acts of retribution in the later chapters that warmed my heart, until it dawned on me that perhaps it's just the neighbors practicing their own brand of witchcraft to keep harm at bay.

If your knowledge and enjoyment of Shirley Jackson is limited to her short story "The Lottery" or her well-known novel The Haunting of Hill House, We Have Always Lived in the Castle will reinforce what a great writer she was.
By Tressa Fancher