This Is What Happened 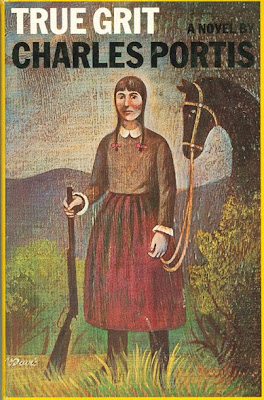 Every eight years or so, over the last forty years, I watch the movie True Grit, for which John Wayne won his only Oscar. It still holds up very well and doesn’t fail to entertain. Over the last thirty years or so I’ve harbored a growing guilty feeling that I should read the book it’s based on. Time after time I’ve read pieces about how its author, Charles Portis, is one of the least known great American writers and that True Grit is his best book. It’s regularly referred to as one of the great 20th century American novels that’s not yet accepted as one of the great 20th century American novels. When it came out in the late sixties, it was a best-seller, the movie was huge, and some critics since have felt that critical snobs at the time just couldn’t abide all that popularity. The novel was way out of step with the counterculture, too, and because of that it never attracted a wide younger audience. What’s interesting here is that, with its immersion in 19th century American desperation and obsolete American slang, it was closely in tune with the spirit of Bob Dylan and The Band’s Basement Tapes. But that album would not get an official release until 1975. It sounds timelessly fresh now, as does True Grit. 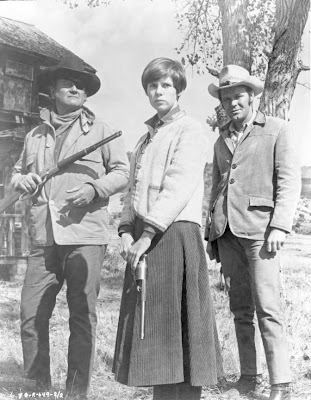 ok zero. So, when a fellow librarian recently enthused about it asked me if I’d read it, I said no and vowed to finally take the plunge. Shamed by another librarian! He buttonholed me. The book has long been described as a buttonhole book, one that you press on others, one you evangelize for. One last buttonhole and now I’m a buttonholer. I’m not a full-fledged member of the Portis cult yet, but I know I’ll soon read The Dog of the South, which a California member of the cult begged me to read when I lived in that state. I did buy it but didn’t read it. Now things will be different.

But about the novel. It was tremendously good and exceeded all my expectations, which had become pretty stratospheric. It was one of the most pleasurable reading experiences of my life. Yes, it’s right up there with the last century’s American greats. And of course it was way better than the movie. It’s a book that succeeds as an adventure story, a Western, a YA novel, a thoroughly 19th century tale written in the 1960s. It’s all of those but none of those because it transcends genre, much as, say, Huckleberry Finn did. That story, too, centered on a young person, was set on the frontier, had adventure, challenged racial preconceptions and literary convention. The opening of the book is plain, austere, gripping:

People do not give it credence that a fourteen-year-old girl could leave home and go off in the winter-time to avenge her father’s blood but it did not seem so strange then, although I will say it did not happen every day. I was just fourteen years of age when a coward by the name of Tom Chaney shot and killed my father down in Fort Smith, Arkansas, and robbed him of his life and his horse and $150.00 in cash money plus two California gold pieces that he carried in his trouser band… Here is what happened.

Here is what happened. So it begins. Mattie is clear and direct, flat, a true Arkansan. She repeats this phrase many times throughout the course of the book. She’s letting us know she’s a reliable narrator. She is not, or not always, a reliable narrator. Discovering when she’s not reliable is on of the many comic pleasures of the novel. Mattie is puritanical. She lectures her accomplice, Marshall Rooster Cogburn, about strong drink. And yet she spends weeks alone with two adult males, Cogburn and another bounty hunter, LaBoeuf (pronounced “LaBeef”) in pursuit of her father’s killer. She’s also enlists the aid of her “colored man” employee Yarnell Poindexter and Captain Boots Finch of the Indian Police. Mattie may be a traditionalist, but she embraces those unlike her because she is finally a pragmatist. She’s terribly class conscious (“There’s trash for you” is a typical Mattie put-down) and yet she ventures forth with the two trackers she doesn’t see as her social equals. But she can’t afford to snub them as she desperately needs them. She’s horribly naïve and yet mature beyond her years. She’s big about the virtues of womanhood but her vengeance forces her to escape the society that would protect her. She’s brimming with contradictions, and this makes her sympathetic, tragic, hilarious, fully rounded, human. Mattie sees herself as apart from the dangerous West (and Arkansas was the West in the 1870s when the book takes place) she must throw herself into in order to avenge her father’s death. This is part of the broader theme of the West becoming “civilized” (for “civilized” read “Europeanized”) that runs through the book. Mattie is forever talking the talk of law, teetotalism and moral retribution. She threatens almost everyone with her lawyer Daggett. It’s almost as if she believes her strong talk will kill any sort of immorality on the spot. She carries a bottle of civilization which she sprays in front of her, clearing the way. But it’s men like Cogburn and LaBoeuf who, in shooting and jailing thousands of outlaws, will do far more than the Mattie Rosses to transform the frontier. Mattie has many quirks. She frequently puts quotes around words as if to say, “This Word isn’t standard English and I Know that, but it’s there anyway and I Can’t think of a better one”. Why, for instance, does she use “drummers”, “crawfish”, and “damper” without quotes but uses “riffraff”, “stunt”, and “cockeyed” with them is beyond me, and probably beyond any historian of slang. It’s enough for us to know she’s protecting her place in the social pecking order. But it’s inadvertently funny, and gets funnier as the story unfolds. Mattie has sworn to kill Tom Chaney or see him hanged. She sees no contradiction between this and her professed Christian values. Many of her era wouldn’t have seen this package as contradictory. A Puritan who believes in an eye for an eye is a type of person that I’ve met on a couple of occasions. Mattie can challenge convention partly because she’s a tomboy. This does not necessarily mean that she’s a lesbian. But she is an independent woman, with a tinge of the protofeminist about her. But Mattie is not a pc heroine and this is not a p.c. book- there’s too much vengeance, anger, blood, hate and fear in it for that.

What of Rooster, her protector and foil? Here’s a sheriff describing him as he offers Mattie a quick rundown of available bounty hunters: “The meanest one is Rooster Cogburn. He is a pitiless man, double-tough, and fear don’t enter into his thinking. He loves to pull a cork”. Rooster is, like Mattie, one of the most indelible fictional characters of the last half-century. As the quote suggests, he’s overwhelming but comical. He’s also violent yet tender, vulgar yet noble, crude but a natural aristocrat. He’s no less fleshed-out a person than Mattie. Poignant, too, he knows the days of bounty hunters are numbered: “No matter if he has got sand in his craw, others will push him aside, little thin fellows that have won spelling bees back home”. That’s another way the West will become settled.

The last member of the trio is LaBoeuf. Here is Rooster, in front of the bounty hunter, telling Mattie what he thinks of the man: “This jaybird calls himself LaBoeuf. He claims he is a State Ranger in Texas. He come up here to tell us how the cow eat the cabbage”. LaBoeuf, like Cogburn, doesn’t want Mattie to come along, because she’s young, untested and female. He constantly berates her but is attracted to her in spite of himself. It’s up to Mattie to challenge LaBoeuf and Cogburn’s ultra-macho view of her. But Mattie is the picture of stubbornness.

The tale takes place in the 1870s, a world lost to us, as foreign in its own way as the Late Renaissance. It’s a place where ex-Union and ex-Confederate soldiers warily patch things up, of the Choctaw Light Horse constabulary, renegades, cattle thieves, Mexican bandits, grisly first aid, elderly men and women trancing out on codeine and laudanum (even Mattie accidentally partakes of some). Where people sign off letters with “Thine Truly”.

Going on about the book to my coworker prompted her to tell me that another movie will be made based on True Grit. This time it’s the Coen Brothers, who feel that the first movie wasn’t faithful to the book. Granted, it could have been much more faithful, and late-60s censorship norms did dull its edge. I did notice that the actor slated for Mattie is sorta cute. That’s not faithful. Several characters in the novel observe that she’s at best plain, at worst ugly. But, then, Kim Darby in movie one was cute, too. Oh, well: Hollywood. I’ll be open-minded and near first in line this December.

But it’s the book that’s the reason for this piece. Immensely good things need to happen to make life bearable and pleasurable. This is one of them.

Check out these two articles comparing the novel and the movie:
True to 'True Grit' by Carlo Rotella
True Lit by Malcolm Jones