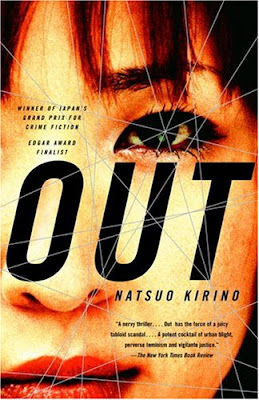 Out by Natsuo Kirino is a brilliant Japanese murder mystery that’s not much of a mystery at all, at least not a mystery in the sense that we don’t know whodunit. Whodunit is a pretty, young wife and mother of two named Yayoi who is fed up with her husband Kenji’s philandering ways, and decides to strangle him one night in an uncharacteristic moment of rage. Assured that her children heard nothing of the struggle, she calls a friend who works the night shift with her at a boxed lunch factory. As she suspects, the pragmatic Masako Katori is not too surprised by the late call, and immediately sets the wheels in motion about how to make the body disappear and maybe make a little money off the insurance payout.

Masako enlists the help of the trusted fifty-something Yoshie, whom she knows is in desperate need of money from caring for her bedridden mother-in-law. But while the two are butchering their first ever dead body in Masako’s bathroom, the fourth friend in their factory clique gets a peek through the window, and Kuniko is enlisted to help with the disposal of the pieces with an offer of money to keep her from blabbing. The body bags have been divided into thirds, and are to be disposed of in different locations all over town. But the sloppy, lazy Kuniko’s bags are easily uncovered and identified, and soon the police show up asking questions. But the police are the least of their worries.

Satake, a calculating nightclub owner and pimp who has his own experience with dead bodies, is arrested for the murder. He is released because of lack of evidence, but he makes finding the killer of this man who stalked one of his girls priority one when he hits the streets. And he has a hunch about where to start looking first: at Kenji’s wife, Yayoi.

Out is one of those delicious domino-effect thrillers in the vein of Scott Smith’s A Simple Plan, where a character’s action leads to an undesirable result, which must be dealt with by an even less sensible and more desperate action, and so on and so on and so on. Out is also a statement about Japan's patriarchal society and the mistreatment of female office and factory workers, and the few options they have for escaping their dreary, tired lives.

Body pieces that won’t stay buried; a wedding band that won't stay thrown away; a hidden key that won't stay submerged; children who know more than should; a loan shark with a tempting but messy business offer; a tenacious detective; and a man and woman who discover after it’s too late that they are more alike than they could ever imagine are the things that make Out the perfect page turner—or button clicker if you own an eReader.