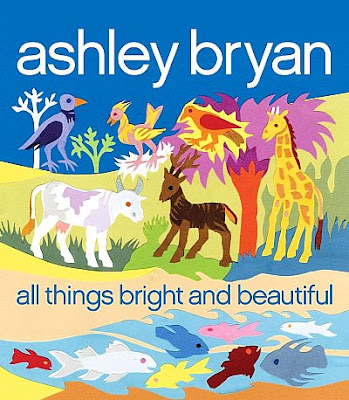 Birmingham Public Library and the UAB School of Education Curriculum and Instruction Department present Rhythms of the Heart: The Illustrations of Ashley Bryan. Rhythms of the Heart will exhibit works on loan from the National Center for Illustrated Children’s Literature. This exhibit is made possible in part by a grant from the Alabama State Council on the Arts and National Endowment for the Arts. The collection will be on display from April 11 through May 20 at Central Library’s 4th Floor Gallery. Central Library will host a reception honoring Ashley Bryan on Thursday, April 28, 2011, at 6:30 p.m. For information on additional programs check the BPL calendar or call 226-3742.

In a career spanning over 48 years, celebrated children’s author and illustrator Ashley Bryan has amassed many accomplishments. Bryan wrote his first book at age 5—an alphabet primer for his kindergarten class; he was one of the few African American students to be awarded a scholarship to the Cooper Union Art School; he taught art at Queen’s College and was professor emeritus at Dartmouth College. Not published until he was 40 years old, Bryan was the first African American to publish a children’s book as both author and illustrator.

Ashley Bryan’s first work as a professional children’s book illustrator began in the late 1960s, and were retellings of folk tales from India and France. When he came across some African folk tales for young people whose English text he considered stiff, he retold them using translations by anthropologists and missionaries who spent time in Africa. Educators and library professionals give Bryan’s work high marks for the sensitivity and exuberance brought to each story. He has won nine Coretta Scott King Awards and a Laura Ingalls Wilder Medal for lasting contribution to children’s literature. When asked about his indefatigable energy and his life as teacher, writer, and artist, he replied: “I don’t really understand what one means by years. I approach everything as if I’ve just begun. I’m always discovering a new world and always have the urge to keep developing. Each time I finish something, I can’t wait to start again and do something even better.”

Rhythms of the Heart: The Illustrations of Ashley Bryan
Central Library, 2100 Park Place
4th Floor Gallery during regular business hours
April 11–May 20, 2011
Free and open to the public