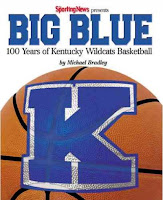 The SEC has ’s number. Time after time, sport after sport, SEC teams prevent from winning championships. Last night, No. 4 seed beat overall No. 1 seed to advance to the Elite Eight. Freshman guard Brandon Knight hit a jump shot with seconds left in the game to put ahead 62-60. attempted a three-point shot with time running out, but the shot bounced off the rim. It was a huge upset for not to advance from the Sweet Sixteen.

I’m not picking on , but no matter how good their teams are, they can’t seem to get past the SEC. If you haven't guessed by now, I’m a big fan of SEC football and basketball. I know I should pick a team and ignore the others, but I cheer for the conference. I celebrated ’s football championship and ’s championship the previous year. I was thrilled when won back-to-back championships in basketball. I’m pulling for and this year to make it to the Final Four. If the SEC wins, I win. I know this makes no sense to a lot of people, but to them I say: Roll Tide! War Eagle! Go Gators! Go Big Blue! You get the point.

The Final Four tips off in Houston on April 2. Hopefully, Florida and Kentucky will be in attendance. Between games, come check out the library's collection on college basketball and March Madness. The Basketball Subject Guide includes links to help keep you up-to-date on college basketball. Enjoy the rest of the tournament.