A Primer for the Proper Lady, Circa 1967 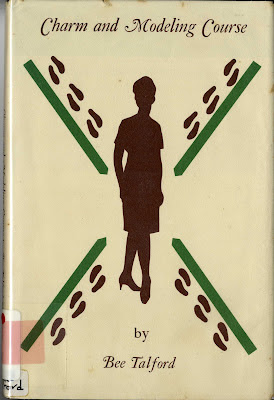 This little gem immediately captured my attention and offers up a fascinating look at the rules of etiquette and fashion for Birmingham women circa 1967. While the title, Charm and Modeling Course, implies that this book was intended for women working or hoping to work as models, the advice is clearly meant for women of all ages and backgrounds. All I can think is, “Wow. Things are much easier now.” In-depth coverage is given to such topics as gloves, their color and various lengths, and when to wear each. For instance, white gloves are to be worn only after 5:00 p.m. from September-December, but are OK any time of day during the rest of the year (by the way, one should never use a slang term such as OK). Other topics covered are posture, shoes, bags, and much more. Helpful charts are included to remove the guess work when it comes to coordinating one’s clothes, shoes, gloves, jewelry, and lipstick with one’s hair color.

The author, Bee Talford was a Birmingham native. She attended Samford University and taught charm courses there. She also coached women in the Miss Alabama pageant and other local pageants. According to her obituary (she died in 2005 at the age of 94), she modeled for Loveman’s Village and taught courses at the Vogue Modeling School, which operated in Birmingham from the late 1950s to the early 1960s. She obviously knew her material and loved sharing her knowledge with young women. She could, however, be quite blunt and direct. As she states in the book’s forward, “it was written for quick consumption—no unnecessary words.” A few of my favorite quotes:

“Be mature and grow up.”

“Remember the older you become, the larger and more unattractive your feet become.”

“Be smart and cover up anything that isn’t in your favor.”

I’ve really enjoyed perusing this little book and, while I may not be matching my bag, gloves, and shoes anytime soon, I have a new appreciation for the work that women of just a generation ago put into all aspects of their appearance and bearing. Things certainly are much easier now.

Mary Anne said…
Things are certainly easier now (thankfully) but, hey, hats are making a comeback these days. Can gloves be far behind? Casting a vote for those slinky ones that come all the way up to the bicep . . .

Of course, the problem with gloves like those is you need the jaws of life to get them off! *g*
10:07 AM

Tressa Fancher said…
I've tried on gloves from this era and earlier when I've seen them in antique stores. Those delicate, slender gloves didn't go past my fingers.

I think there is a comfortable medium for us women between high heels and stockings to vacuum the floor and Juicy Couture sweatpants to dine out in.
12:05 PM