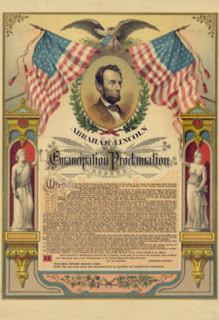 Most of us are aware of the Emancipation Proclamation that was issued on January 1, 1863, but probably fewer realize that a preliminary Emancipation Proclamation was signed by President Abraham Lincoln on September 22, 1862. Although it has nowhere near the stirring rhetorical qualities that we have come to associate with Lincoln’s writing, the preliminary proclamation nevertheless had an enormous substantive impact on the both course of the Civil War and future of American society. By declaring that all slaves held in the rebellious states would be free, Lincoln made the abolition of slavery a central concern of the United States government.

The preliminary proclamation was actually issued as a military order, specifically General Orders No. 139. Lincoln chose to do this so that his policy could be enacted swiftly without having to wait for the consent of Congress. Furthermore, the timing of document’s release was dictated by military matters as well. Lincoln had actually drafted the proclamation in July of 1862, be he waited until the conclusion of the Battle of Antietam on September 17th to make it public. Antietam was by no means a decisive victory for the Union, but it did halt the Confederate invasion into the north. Lincoln was more than happy to take this small triumph and use it to his advantage. He, and his advisors, had thought that they needed to issue the proclamation from a visible position of strength on the battlefield because to do otherwise would make its issuance appear to be an act of desperation by a shaky government.