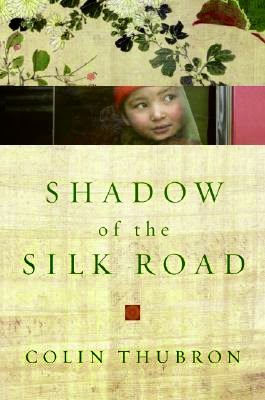 Colin Thubron is the Grand Old Man of British travel writing. But he didn’t tackle the Silk Road until after the turn of the twentieth century. I’d already read many of the leading 20th century Brit travelers such as Wilfred Thesiger, Bruce Chatwin, Eric Newby, Redmond O’Hanlon, and Jan Morris, but I’d never read Thubron. Could he live up to the reputation? That he’d traveled from western China on to Central Asia and the Middle East ending up in Syria and that he did it while well into his sixties was impressive. He knew Chinese and Russian, but even this didn't help him with the local variants of those languages, let alone the dozens of completely different tongues. But he did it all, by foot, boat, bus, camel, and more. It helped that he was well-read and that he can fuse scholarship and poetic writing gracefully.

The Silk Road has been called the medieval internet. It’s how East and West communicated with each other (albeit through static and distortions), shaped each other, transformed each other. With the information Thubron relates, your notions of East is East and West is West are dismantled again and again. Because of this and other feats, you lose your parochialism during the course of reading, even that parochialism you didn’t know you had. You see history and the present in a new way. You learn how the harp went east from Central Asia, how the flute went west, how “the horsehead fiddle moved down the Silk Road to become the ancestor of strings everywhere, even the European violin.” How silk itself was smuggled out of China and made its way to Europe. How Christianity spread through the Middle East and on to India and China. How the Greek gods migrated to Central Asia. How papermaking went west. How an Indian god became a Chinese goddess. I’m skimming; there’s much more. One account positively stays in the memory. The Romans lose a battle in the Middle East. The soldiers disappear near Parthia (roughly the eastern part of modern-day Iran). They surrender to an eastern power and are later spotted, in an ancient Chinese history, fighting for the Chinese. The common thread in western and eastern accounts is the characteristic fish scale pattern they make when they place their shields over them to ward off raining weapons. A generation ago, in an area of western China near Gansu, archaeologists discovered Roman-like walls. Locals sometimes have blonde hair and blue eyes. In an odd sense, this may have been as far east as the Romans ever got. Like so many of the places Thubron visits, current events shed light-or a shadow-on the history of the Silk Road, and history returns the favor.

I mentioned earlier Thubron’s poetic gift. Here is a typical passage that especially impressed me. He is in Dunhuang, western China, describing the wall art in the famous caves there: “…Buddhism in China kept open house…In several shrines the ceilings teemed with Hindu angels and lotus flowers, while among them flew nine-headed dragons and all the Taoist pantheon…the borders between faiths [were] swept away.”

Occasionally, throughout the book, Thubron intersperses fictional conversations between himself and an ancient Silk Road trader. The last exchange indicates a bit of Thubron’s own exhaustion and insight at the end of his journey. The trader: “Maybe we’ve been too long on the road. I have forgotten my tribe, even what its totem was. It is time to go back. And we cannot. I died in the desert near Khotan, too soon. We were carrying salt, and the camels were overloaded. My friend, farewell. It is not so bad.”

The Trader lives in these pages, in the real people Thubron encounters, in the history permanently altered by him and his kind. The author has revealed that we are all part of a greater human whole, West and East, subtly fused by the Silk Road, and we’re the more complex and interesting for it. Under our Western self we are Eastern and the reverse is true. This cosmopolitan layer Thubron has uncovered for us. The term Citizens of the World doesn’t sound pretentious anymore, but accurate. At the very end, the author concludes,”…the Silk Road itself has created and left behind these blurs and fusions, like the bed of a spent river, and I picture different, ghostly maps laid over the political ones-maps of fractured races and identities.”

A novel historical and contemporary account that wakes us out of our tired assumptions and conventional wisdom. It’s something of a miracle.