Lecture on the Gay Bar in American History Led by Dr. Nancy Unger at Central Library on October 16 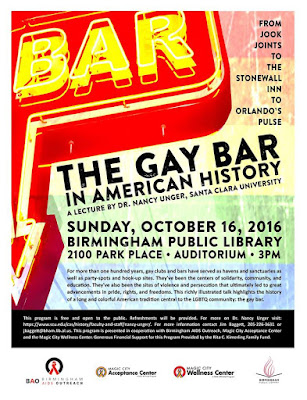 What: From Jook Joints to the Stonewall Inn to Orlando's Pulse: The Gay Bar in American History – A lecture by Dr. Nancy Unger of Santa Clara University
When: Sunday, October 16, 2016, 3:00 p.m.
Where: Central Library, Linn-Henley Research Library, Arrington Auditorium, 4th floor
Details: Free and open to the public. For more information contact Jim Baggett at
205-226-3631 or jbaggett@bham.lib.al.us.

For more than a century, gay clubs and bars have served as havens and sanctuaries as well as party spots and hook-up sites. They've been the centers of solidarity, community, and education. But as evidenced by the June 12, 2016, attack on The Pulse, an Orlando nightclub where a gunman killed 49 people and wounded 53 people in a hate crime, gay bars and nightclubs have also been the sites of violence and persecution that ultimately led to great advancements in pride, rights, and freedoms.

The Birmingham Public Library (BPL) is hosting a richly illustrated talk highlighting the history of a long and colorful American tradition central to the LGBTQ community: the gay bar. From Jook Joints to the Stonewall Inn to Orlando's Pulse: The Gay Bar in American History, a lecture by Dr. Nancy Unger of Santa Clara University, will take place on Sunday, Oct. 16, 2016, at 3 p.m. in the Central Library’s Arrington Auditorium.

The program, free and open to the public, is being presented in cooperation with Birmingham AIDS Outreach, Magic City Acceptance Center, and the Magic City Wellness Center. C-SPAN will film the program for broadcast on C-SPAN’s American History TV.

The lecture speaker, Dr. Nancy Unger, is a history professor at Santa Clara University in Santa Clara, California. She holds a Ph.D. and M.A. from the University of Southern California and a B.A. from Gonzaga University. Unger has written extensively on progressivism in the United States and LGBTQ history and has been published in Time and CNN.com. For more information contact Jim Baggett, 205-226-3631 or jbaggett@bham.lib.al.us.
By Tressa Fancher