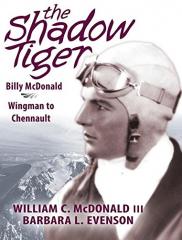 One of the more memorable experiences of my teen years was the opportunity to interview an African American veteran of World War I for a school assignment. Though I would now ask many more questions (and have better questions to ask), I can remember a feeling of awe as he gave his reminiscences of the war and his life afterwards, including the deadly Spanish flu epidemic of 1918. It was a privilege to speak with him and it is one of my treasured memories since our World War I veterans are all gone.

Now that veterans of World War II are going the way of their Great War predecessors, every scrap of information about their lives and careers is valuable—and as I looked through The Shadow Tiger, I was thinking, “Why have I not heard of this man before?” The Shadow Tiger is William McDonald’s account of the life and exploits of his father, Billy “Mac” McDonald, from his childhood in Fairfield, Alabama, to his dreams of becoming a flyer like Birmingham’s only World War I flying ace, Jimmie Meissner, through his career as an instructor for the Chinese Air Force, to combat pilot and wingman for Claire Lee Chennault of the Flying Tigers. The book is put together almost like a scrapbook, packed with illustrations and excerpts from Mac’s personal letters and journals, so that reading it is almost like hearing him tell his own story. Some of the excerpts are lighthearted glimpses of encounters with different cultures, such as a Chinese dinner in which one of the dishes was elephant trunk with mushrooms, accompanied by deer tendons with ham, bear paws, and bean sprouts. But one letter during an assault on Nanking by the Japanese strikes a far more serious note:


There probably is one of the greatest Wars coming up in this part of the world that can be imagined. At present the situation looks serious one day and calmed down the next and it is practically impossible to guess what is going to happen. It is quite possible that a World War will be the outcome—naturally we are hoping for the best and hoping that our Diplomatic Corps can take care of the situation by wielding the pen . . .

This letter is dated September 1, 1937—years in advance of either the German invasion of Poland or the Japanese attack on Pearl Harbor. McDonald’s letter was chillingly prophetic.
And when the next world war did come, he had just applied for leave because he had been in China for four years and felt like he needed some time at home, but since two pilots were already on home leave, he had to wait. This was on November 31, 1941:


When Pearl Harbor and the attack on Hong Kong and the Philippines happened, Mac flew into Hong Kong from Rangoon about 10:00 pm.

The first thing he said to me was, “Damn! Am I glad you didn’t let me go home as I requested about 10 days ago. If I were home now I would be the unhappiest man in Alabama.”

There is now a permanent exhibit in honor of Billy McDonald in the Air Force Enlisted Heritage Hall at Maxwell Air Force Base. There is much that might be said of his distinguished career, but perhaps the best words to honor him come from his friend and colleague Lt. General Claire Lee Chennault: "Williamson and McDonald are outstanding pilots . . . I would choose these two men to accompany me into combat, and that is the highest compliment a combat formation leader can pay."

If The Shadow Tiger interests you, come and meet the author! William C. McDonald III will be at Central Library on Thursday, November 10, at 1:00 p.m., in the Arrington Auditorium. Copies of the book will be available for purchase.

Who are the veterans in your life? Listen to their stories while you can.