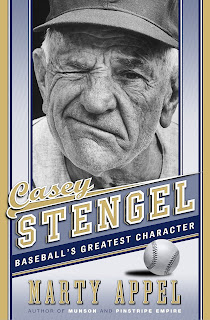 “There comes a time in every man’s life, and I’ve had plenty of them.”

Looking back over this week’s winter baseball meetings, it seems that every sports reporter is talking about launch angles, or the possibility of super-agent Scott Boras securing a $400 million paycheck for Bryce Harper. And, as always, the commissioner’s office seems to be concerned only with "the pace of the game."

In this cynical time, it’s relaxing to read about a golden bygone era in baseball when salaries were doled out in the tens of thousands, and players and managers could become "American folk heroes" simply by playing a game. Casey Stengel: Baseball’s Greatest Character by Marty Appel is just such a feel-good biography about a great American sports figure.

Casey Stengel’s (1891-1975) life spanned baseball eras. He was first paid to play baseball while still in high school. In 1908 he pitched for Harzfeld’s, a Kansas City department store, for $1.50 a game. He worked his way through the early 20th century minor league system before breaking into the majors. You’ve probably heard that old Johnny Cash song, "I’ve Been Everywhere." That song could have been the soundtrack for Stengel’s career. Appel lists all the cities Stengel played in or managed at in his 55 years on baseball diamonds and it’s a more of a gazetteer than a resume. (And before you ask, Casey played in Montgomery in 1912 and Birmingham in 1920.) In 1962 at the age of 71, he became the manager of the New York Mets. (Two years later he was still joining his players in on-field fights.)

Over the course of his 55 years playing baseball and managing teams Stengel won ten pennants and seven world championships. What were his secrets? As a player, he described himself as “…such a dangerous hitter I even got intentional walks during batting practice.” Managing, on the other hand, required not power but finesse. “The key," he explained, “to being a good manager is keeping the people who hate me away from those who are still undecided.”

You can see why he’s remembered today as something of a professor of rhetoric to Yogi Berra. Casey was always spouting malapropisms, Freudian slips, and just plain crazy talk. However, beneath the clown’s chatter was a true student of the game, a man who devoted his life to baseball and by the time of his retirement was viewed by the baseball intelligentsia as a don of the American school of baseball. Marty Appel’s biography proves it’s not the pace that make the game perfect, but the characters on the field and in the dugout.
By Tressa Fancher