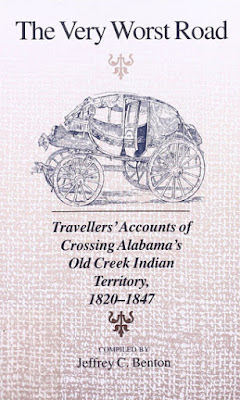 This is a peak time of year for travel, complete with traffic jams and unexpected delays—but the next time you fret about how long it takes to reach your destination, be thankful you’re not traveling the old Alabama roads of the early 19th century. The Very Worst Road is a compilation of writings about what it meant to travel in the days when going fifty miles was a long journey that might last all day or into the night. There were no rest areas and no motels, no guarantee of spending the night with a roof over your head. However, it was a wonderful era for travel writing, as Benton points out in his prologue:

In the years before the American Civil War, travel books captivated the imaginations of Americans and Britons alike. Both peoples were restless and desired exploration and new experiences, even if vicariously. Two types of travel literature satisfied these desires: that in which the travelers were required to endure hardships and overcome physical obstacles and that in which the reader could experience a sensual escape from Victorian mores. The physical hardships of crossing Creek Indian territory—roughly from Columbus, Georgia, to Montgomery, Alabama—fulfilled the former requirement, and, to a slight degree, the Native Americans fulfilled the latter.


Even the most seasoned and fearless voyager might find these early Alabama adventures a daunting experience. One account that survives is from William Gratton Tyrone Power, an ancestor of the Hollywood star Tyrone Power, who traveled in Alabama during December of 1834 and regales us with an account of  "a wild-looking village, scattered through the edge of the forest, bearing the unattractive name of Sodom [Girard; today's Phenix City]. Gamblers, and other desperate men, here find security from their numbers, and from the vicinity of a thinly inhabited Indian country, whose people hold them in terror, yet dare not refuse them a hiding place." However, Power later describes some regions as "wildly beautiful" and observes that "nowhere in this South country have I yet seen a place which promises more of the prosperity increasing wealth can bestow than this . . ." His airy comment that "I do not consider that a traveller runs the least risk" may say more about the swashbuckling streak he passed down to his Hollywood descendant than about the actual difficulties of journeying through those regions.

We get a more unnerving account from P.T. Barnum—yes, that P.T. Barnum—whose autobiography The Life of P.T. Barnum provides a description of his travels in Alabama in 1837: "Many considered it hazardous to pass over the road without a strong escort. The day previous to our starting, the small stage had been stopped, the passengers all murdered, and the stage burned, the driver escaping almost by a miracle . . . we all armed ourselves with guns, pistols, bowie knives, etc., and started on our journey."

On a lighter note, we have Anne Newport Royall's spirited retort to the landlord of a tavern where she was spending an evening in 1830. It seems the landlord thought it was a good joke to imitate Indian war-whoops and frighten her, "an aged, unprotected woman." However, Royall shows herself about as frail as a set of brass knuckles when she sends for the offender:

"Now sir, said I, 'if I hear another loud word after this, I quit the place, and seek a place to sleep among the Indians of the neighborhood. I am not afraid of your yelling . . . but sir, I will not be insulted.'"


Apparently, "if ever a poor fellow was frightened, the landlord was" and Royall passed the remainder of the night in peace.

Our ancestors, men and women alike, were a tough lot and could make light of unbelievable hardships. To them, these were simply the realities of travel in a wild and unsettled region and all of a piece with the demands of everyday life. One wonders how they would view our modern miracles of travel. If the accounts recorded in The Very Worst Road are a fair sample, these people would probably find our sports cars and international flights an exhilarating experience.

The Federal Road through Georgia, the Creek Nation, and Alabama, 1806-1836

The Life of P.T. Barnum

Anonymous said…
I was given this book for my birthday, but just got the copy today. Having driven in the shadow of the Federal Road, and re-traced countless others that currently obscured by progress, reading the early accounts is always fascinating.