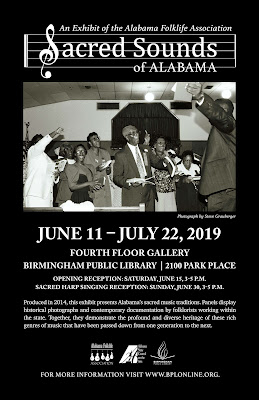 What: Opening Reception for Sacred Sounds of Alabama exhibit
When: Saturday, June 15, 2019, 3:00–5:00 p.m.
Where: The Central Library Fourth Floor Gallery
Details: Free and open to the public

We’ll Sing Hallelujah: Sacred Sounds of Alabama is produced by the Alabama Folklife Association and pays tribute to genres of music that have been passed on through generations. The exhibit will be on display in the Central Library’s Fourth Floor Gallery through Monday, July 22, 2019.

Another reception for Sacred Harp singers will be held on Saturday, June 30, 3:00–5:00 p.m., after the group performs a special singing on the sixth floor of the Jefferson County Courthouse, located just across the street. The all-day singing will celebrate the forthcoming release of Alan Lomax’s field recordings for the Library of Congress. They were made during a singing on the site of the courthouse in August 1942.

“The AFA is honored to bring the exhibit to the library, especially during the year of Alabama’s Bicentennial, when there are so many special programs taking place in the city,” said Executive Director Mary Allison Haynie. “While several sections of the exhibit will be very familiar to many, residents, visitors, and newcomers can learn about Sacred Harp traditions or gain a greater understanding of the many noteworthy honors bestowed on Alabama artists.”