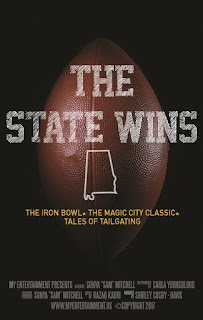 Football season is right around the corner, and, in Alabama, that’s like having your birthday, Christmas, and the 4th of July all rolled into one. What’s that? You’re not familiar with the anticipation and excitement that grips all residents of the Heart of Dixie at this time of year? Well, that is just unacceptable. Not having an adequate understanding of the place football holds in the heritage of our state is certainly a dangerous symptom of cultural illiteracy and must be attended to immediately. Fortunately, a remedy is available in the form of the documentary film The State Wins, which is directed by local Birmingham filmmaker Sonya “Sam” Mitchell. The film will make its public premiere at the Birmingham Public Library’s Central location on Saturday, August 24, 2019 at 1:00 p.m.

Mixing old photographs, contemporary footage, and interviews, The State Wins tells the story of football in Alabama from the vantage point of two of the sport’s most celebrated games: the Iron Bowl and the Magic City Classic. These annual contests have been going on for decades and their outcomes have profound ramifications on the emotional state of Alabamians for 365 days a year. The Iron Bowl pits the teams from our flagship state universities, the Alabama Crimson Tide and the Auburn Tigers, while the Magic City Classic is the rivalry game between the largest of our historically black universities, Alabama A&M and Alabama State. For many years, the two games were linked by the venue in which they were played, Birmingham’s Legion Field. Alas, the Iron Bowl is no longer contested at “the Old Gray Lady,” as the stadium is affectionately known, but 2019 will mark the 73rd consecutive year that the Magic City Classic will be held at this Birmingham landmark. Memories and reminiscences of the great games and players abound in the film’s interviews, as tailgating fans of each school exude the passion and enthusiasm that help make football such a vital component of the culture our state.

For further information about the screening of The State Wins, please contact Jim Murray in the Central Library’s Business, Science and Technology Department at jmurray@bham.lib.al.us or 205-226-3691.
By Tressa Fancher