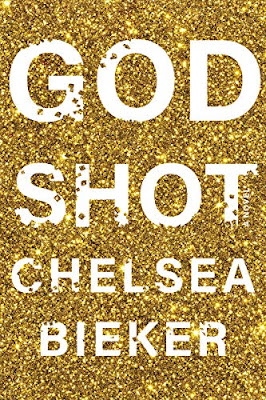 The debut novel by California native Chelsea Bieker, Godshot, is a worthy entry into the feminist tradition of Margaret Atwood’s The Handmaid's Tale and Educated by Tara Westover. Bieker writes with a convincing, clear voice of how people can be deceived and misled by those in authority. Set in the same area where Bieker grew up, the small town of Peaches, California, is devastated by the lack of rain. The son of a former minister, Pastor Vern becomes a religious cult leader and de facto ruler by his apparent ability to call down a rainstorm. This one-time occurrence is enough to convince the economically depressed community to accept him and his increasingly bizarre “assignments” for the females and teenage boys in his congregation.

Vern has a mysteriously vacant recent past and a wife and daughter complicit in his "ministry." Isolated and indoctrinated, his followers include the mother and grandmother of the central character, the aptly named 14-year-old Lacy Mae Herd. One ironic twist is that the leader demands his followers drink processed drinks other than water and baptizes them in soda. This is (perhaps) a comment on our consumerist tendencies for self-destruction and adds another facet to the Peaches residents' obsession with water.

Thankfully, in this case, the phrase “all we like sheep are led astray” does not apply. Lacey Mae is able to see the corrosive effects on her friends and family, but is unable to control events. As such, she both illustrates and inhabits the experiences of young women around the world who are exploited and disenfranchised by the male power structure. Attempting to find acceptance and love, Lacey turns to an itinerant young man who seems to be a way out of her situation. At least he buys her a cell phone!

Lacey Mae’s mother and grandmother are both alone, one a widow and the other abandoned. Both are unable to break the cycle of bad choices and misplaced trust. As she experiences the throes of teenage affection and romance, Lacey is also increasingly wary of the motives of both the teens and the older men in their circles. Her mother’s mysterious assignment turns out to be more of a cry for help than an evangelistic endeavor, and Lacey learns that those rejected as unbelievers may in fact be her strongest allies and a means of salvation.

With its images of inappropriate sexual encounters and terrifying cult behaviors, the story of how Lacey and a few others eventually find the truth and work to survive this apocalyptic spiral is a gritty but inspiring vision of how we can all strive to overcome hardships. But there is always a price to be paid, as Lacey finds out. Lacey is a tough, determined role model and a survivor with a strong sense of justice. All we can do, as Lacey and others discover, is to try to make things better for the next generation.
By Tressa Fancher