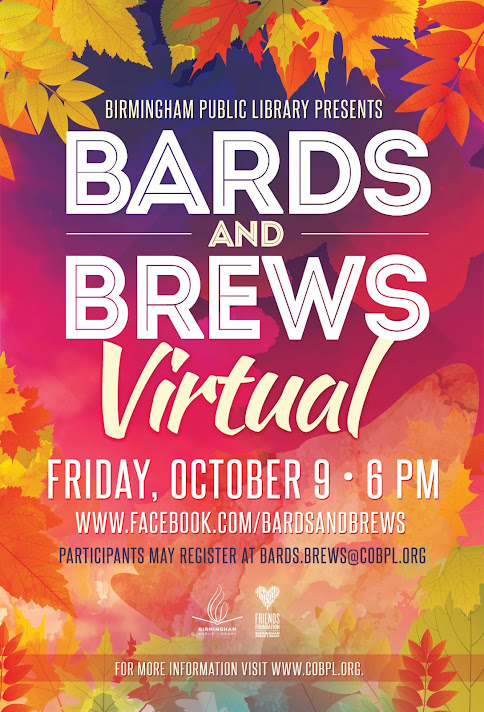 The Birmingham Public Library's put the art of spoken word poetry in Alabama on the map 10 years ago by creating Bards & Brews, a monthly event that combines spoken word and craft beer. This Friday, October 9, BPL will host Bards & Brews Virtual, its first event since Brandon Leake provided worldwide attention to the entertainment genre by becoming the first spoken word artist to win America's Got Talent, NBC's popular reality show.

Bards & Brews will air beginning at 6:00 p.m. on the Bards Facebook page, www.Facebook.com/BardsandBrews.
Candice Hardy, Bards & Brews Creative Director and Outreach Librarian for BPL, says Leake's victory in "AGT" was a "triumphant moment for poets and artists nationwide."
Poets who desire to share their gift by participating can still register for a few slots open by emailing Bards.Brews@cobpl.org. "If they can't find an outlet, Bards & Brews has a special place just for you!," Hardy said.
Preparing to enter its 11th year this fall, Bards & Brews has become one of the Birmingham Public Library’s most successful programs, with its combination of spoken word poetry and craft beer attracting a patrons both young and old. Even after being switched online to the Bards & Brews Facebook page since April, the monthly program has continued to attract a diverse viewing audience of patrons.
Prior to COVID-19 pandemic, Bards & Brews rotated the past 10 years between library branches, Birmingham bars and other city departments. The program has won national accolades, and was featured in March 2018 by Anna Weaver of North Carolina in her blog about her visit to open mics in all 50 states.
Bards & Brews host Voice Porter was also featured in a national spotlight by Starbucks Coffee in August 2019.
"AGT" winner Leake was a fan-favorite ever since he received the coveted Golden Buzzer from judge Howie Mandel upon his first performance early in the season, which enabled him to go straight to the season-ending live shows. He won "AGT" by reciting a prayerful poem dedicated to his baby girl. See link here https://www.youtube.com/watch?v=H0WMtt5iL04
By Roy L. Williams