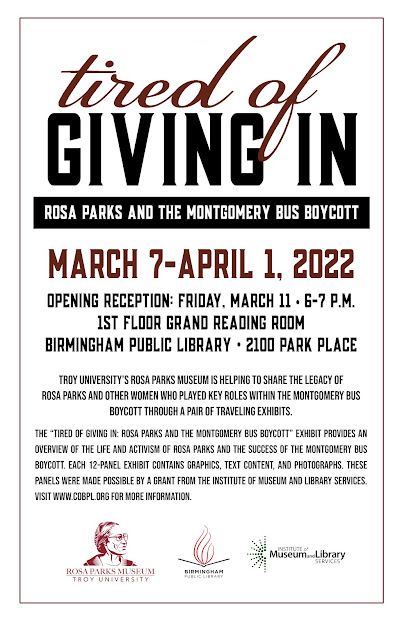 What: “Tired of Giving In: Rosa Parks and the Montgomery Bus Boycott” Exhibit Opening Night Reception
When: Friday, March 11, 2022, 6:00 p.m. to 7:00 p.m.
Where: Central Library Grand Reading Room, 2100 Park Place, Birmingham, AL, 35203
Details: Officials from the Rosa Parks Museum on the campus of Troy University will host an opening reception in the Central Library’s Grand Reading Room on the first floor in downtown Birmingham. The event will feature a talk about the exhibit from Madeline Burkhardt, Adult Education Coordinator/Curator of the Rosa Parks Museum. The exhibit will be on display during Central Library operating hours from March 7 through April 1, 2022. The Tired of Giving In: Rosa Parks and the Montgomery Bus Boycott exhibit was made possible by a grant from the Institute of Museum and Library Services.
Following the Rosa Parks opening reception, stay at 7:00 p.m. and join the Birmingham Public Library as the Central Library Hosts a Bards & Brews Open Mic Tribute to Women’s History Month. The event, with a theme of “Strong Her, ” will be hosted by Ashley Jones, Alabama’s first Black Poet Laureate. Some of metro Birmingham’s most talented poets will share original poetry paying tribute to strong women. Bards & Brews is proud to host our Women’s History Month Open Mic event the same night a reception is held at the Central Library to honor a Strong Her icon like Alabama native Rosa Parks. 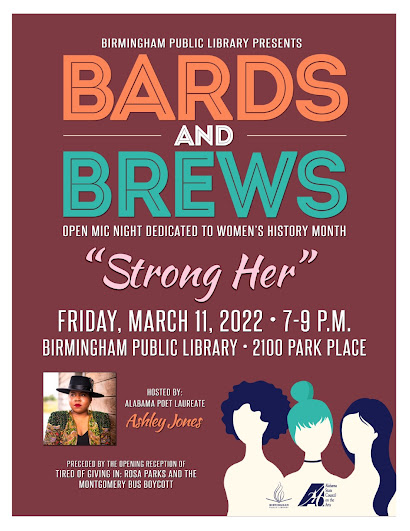 What: Bards & Brews Open Mic Tribute to Women’s History Month
When: Friday, March 11, 2022, 7:00 p.m. to 9:00 p.m.
Where: Central Library, 2100 Park Place, Birmingham, AL, 35203 Details: Bards & Brews Open Mic Tribute to Women’s History Month, with a theme of “Strong Her, ” will be hosted by Ashley Jones, Alabama’s first Black Poet Laureate. Some of metro Birmingham’s most talented poets will share original poetry paying tribute to strong women. Bards & Brews is sponsored by the Alabama State Council on the Arts.
Birmingham, Ala. - The Birmingham Public Library is honored to kick off its celebration of Women’s History Month on Friday, March 11, by hosting a public reception of the Rosa Parks Museum exhibit at the Central Library, followed by Bards & Brews Open Mic Night Tribute to Women.
The opening reception for “Tired of Giving In: Rosa Parks and the Montgomery Bus Boycott, will be held on March 11 from 6:00 to 7:00 p.m. in the Central Library Grand Reading Room, 2100 Park Place in downtown Birmingham.
“Bards & Brews: Strong Her” will follow from 7:00 to 9:00 p.m., as spoken word artists are invited to share original poems in tribute to strong women. Ashley Jones, Alabama’s first Black poet laureate, will host this special Bards & Brews tribute.
Troy University’s Rosa Parks Museum in Montgomery is helping to share the legacy of Rosa Parks and other women who played key roles in the Montgomery Bus Boycott through this traveling exhibit, which will be on display at BPL’s Central Library between Monday, March 7, and Friday, April 1, 2022.
The March 11 opening night reception will feature a presentation by Madeline Burkhardt, Adult Education Coordinator/Curator of the Rosa Parks Museum. The 45-minute PowerPoint will feature Rosa Parks as well as some other women who were instrumental in the Montgomery Bus Boycott, but are not well known. Following her talk, Burkhardt will lead a question-and-answer session with reception attendees.
“Tired of Giving In: Rosa Parks and the Montgomery Bus Boycott” is a traveling exhibit sponsored by the Institute of Museum and Library Services. It provides an overview of the life and activism of Rosa Parks and the success of the Montgomery Bus Boycott. Each of the12 panels contains graphics, text content, and photographs related to Rosa Parks and the Montgomery Bus Boycott.
Visit www.cobpl.org for more information  about the exhibit.
For more details on the Rosa Parks Museum, click on www.troy.edu/rosaparks.
About the Opening Reception Speaker, Madeline Burkhardt
Madeline Burkhardt is the adult education coordinator and curator at the Rosa Parks Museum. In almost 6 years there, she has implemented programs and hosted exhibitions that directly address relevant social justice issues and the current civil rights movement.
Madeline was recently listed as one of Blooloop Travel & Leisure’s top 50 museum influencers in the world and has been featured on three “30 Under 30" lists over the past 3 years. Madeline currently serves on the Capri Theatre's Board of Directors. She received her Bachelor of Arts in Art History with a minor in Italian Studies from Auburn University and her Master of Arts in Museum Studies from John Hopkins University.
About the Rosa Parks Museum at Troy University Montgomery
Address: 252 Montgomery Street, Montgomery, Ala. 36104
Hours: Open Monday-Friday 9:00 a.m. to 5:00 p.m. (last admission is at 4:00 p.m.
Phone Number: (334) 241-8615 Email: rosaparks@troy.edu
Website: www.troy.edu/rosaparks
When founded: The Main Wing of the Museum opened in 2000; the Children's Wing opened in 2006.
Follow on Social Media: @RosaParksMuseum
Twitter https://twitter.com/RosaParksMuseum
Instagram https://www.instagram.com/rosaparksmuseum/
Facebook https://www.facebook.com/TroyUniversityRosaParksMuseum/
Details: The Rosa Parks Museum
• Collects, preserves, and exhibits artifacts relevant to the life and lessons of Rosa Parks, the Montgomery Bus Boycott, and the Civil Rights Movement.
• Provides educational programs and scholarly resources for K-12, adult, and lifelong learners.
• Reaches diverse audiences through various cultural events, educational programs, and temporary exhibitions designed to raise social consciousness, encourage cultural appreciation and acceptance, and promote peace
The Rosa Parks Museum is an active memorial to the life of civil rights icon Rosa Parks and the lessons of the Montgomery Bus Boycott that brought racial integration to transportation and international attention to civil rights. Located in downtown Montgomery, Alabama at the site where Mrs. Parks was arrested, it is the nation’s only museum dedicated to Rosa Parks. Our mission is to honor her legacy and that of the boycott by providing a platform for scholarly dialogue, civic engagement, and positive social change.
The museum’s collection contains a number of historically significant artifacts including the original fingerprint arrest record of Mrs. Parks, a 1950s-era Montgomery city bus, original works of art including statuary and quilts, court documents and police reports, as well as a restored 1955 station wagon (known as a "rolling church") used to transport protesters.
By Roy L. Williams