Hoopla is providing another month of bonus borrows during the month of February.  From now until the end of the month, you can borrow additional Ebooks, audiobooks, movies, comics, and television shows that will not count against your monthly borrowing limit. Included in the bonus borrows are a number of African-American and Black History Month related titles. The following are an example of some of the bonus borrows that are available this month.

Cody High: A Life Remodeled Project focuses on the efforts of Detroit's impoverished Cody Rouge community to remove blight and create a safe environment for students at the local schools, including the hundreds of students who attend Cody High School. In 2014, residents of Cody Rouge, in partnership with Life Remodeled, a Detroit-focused non-profit organization and 10,000 volunteers rose up to bring new life to the troubled neighborhood. Together they remodeled three schools, tore down three burned-out houses, remodeled 25 homes of students and their families, boarded up 254 vacant houses, and brought beauty back to 303 blocks of Detroit. Cody High: A Life Remodeled Project skillfully portrays the powerful stories of community members and volunteers who were involved. It documents how community institutions, especially churches and other faith based groups have mobilized the larger community to become beacons of hope within the great city of Detroit.

Slavery and the Making of America (television)

A documentary of the history of American slavery from its beginnings in the British colonies through the years of post-Civil War Reconstruction, this series examines the integral role slavery played in shaping the new country and challenges the long held notion that it was exclusively a Southern enterprise. The remarkable stories of individual slaves offer fresh perspectives on the slave experience. 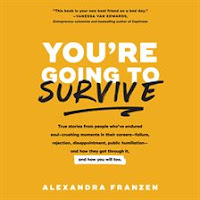 You're Going to Survive (audiobook)

Life involves adversity: No matter what kind of career you've chosen, you're going to deal with discouragement, frustration, and situations that are, shall we say, “less than ideal”. It could be a hysterical client who's demanding a refund. Or a book that gets rejected...48 times and counting. Or a job interview that goes nowhere. Or watching your best friend get the exciting promotion that you wanted. Or a vicious one-star review that rattles your self-esteem and makes you question your talent, your identity, everything. When that moment arrives, listen to this audiobook.

Orphaned as a child and raised on the margins of society, Jack Boniface never knew his place in the world. Until he discovered it waiting for him... in a darkness far older than the reign of men...

Unbeknownst to him, Jack was fated to become the next in a long lineage of Shadowmen — mortals bound to loas, violent voodoo spirits of immense power — that could safeguard our world against incursions from realms beyond.

For years, Jack struggled to control his loa's murderous urges — a battle he eventually lost.

But now, after years of self-imposed exile, the man once known as Shadowman is returning home to sharpen the weapon within...and unleash a reckoning on the evils of our world that will soon send shockwaves through heaven and hell alike...

In the spirit of bestsellers such as Guns, Germs, and Steel, The Coming Plague, and The Ghost Map, Dr. Bonnie Henry provides an eye-opening account of what ails us. As a physician who has spent the better part of the last two decades chasing bugs all over the world -- from Ebola in Uganda, to polio in Pakistan, to SARS in Toronto, to the H1N1 influenza outbreak in Mexico -- Dr. Bonnie Henry, a leading epidemiologist (virus hunter) and public-health doctor, offers three simple rules to live by: clean your hands, cover your mouth when you cough, and stay at home when you have a fever. It all boils down to basic hygiene.