Book Review : The Deep, the extraordinary creatures of the abyss 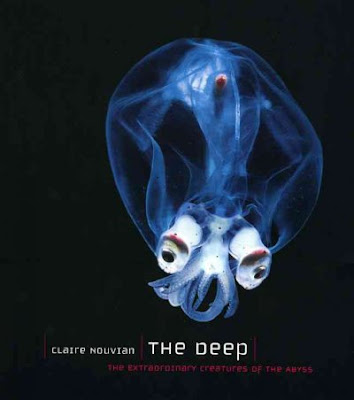 “It was a squid of colossal dimensions, fully eight meters long. It was traveling backward with tremendous speed in the same direction as the Nautilus. It gazed with enormous, staring eyes that were tinted sea green. Its eight arms (or more accurately, feet) were rooted in its head, which has earned these animals the name cephalopod; its arms stretched a distance twice the length of its body and were writhing like the serpentine hair of the Furies.”
From 20,000 leagues under the sea by Jules Verne

I have to confess that I’ve always had mixed feelings about coffee table books. On the one hand, these oversized books usually have lush, never before seen photographs that leave me dreaming about whatever topic the book covers. But on the other hand, these tomes frequently have an exorbitant price tag. After spending an hour with my new, expensive book, I walk away wondering why I spent $45.00 on the book equivalent of Whitman chocolates when I could have consumed two or three steak dinners for the same price.
That was then, this is now. I recently purchased a book of photographs that is absolutely unbelievable. The Deep: the Extraordinary Creatures of the Abyss by Claire Nouvian is a book of photographs that has me reconsidering my stance on coffee table books and will you leave you breathless.
Thanks to new submersibles capable of searching down to six miles, photographer Claire Nouvian was able to photograph deep sea creatures in their natural environments. Though natural is hardly the word to describe these environments. These marine animals exist in a depth of the ocean untouched by light of any type. The nearly flat floors of the Arctic Ocean and the Monterey Canyon are occasionally interrupted by submerged mountains, hydrothermal vents, underwater volcanoes and whale carcasses.
The fish that occupy this habitat are just as otherworldly. Many of the creatures use a bioluminescence that renders them either angelically beautifully or frighteningly surreal. Others use bizarre appendages to hunt and wander through the eternal darkness, and all seem to have alarming names like viperfish, cutthroat eel, spookfish or vampire squid from hell. (No, I’m not making up that last one. You’ll understand when you see it.)
This is not simply a stunning photography book; Nouvian has included 15 essays written by leading deep sea biologist who shed some light on the mysteries of the deep. But only some. “5% of the seafloor has been mapped, and scientists estimate that there are between 10 million and 30 million species in the 'vasty' deep.”
This coffee table book is not only a full meal, but a new, exotic dish that words simply can not describe. Click on the link below, and then choose GALLERY to view some of the 220 color photographs.
http://www.thedeepbook.org/
By DNRyan