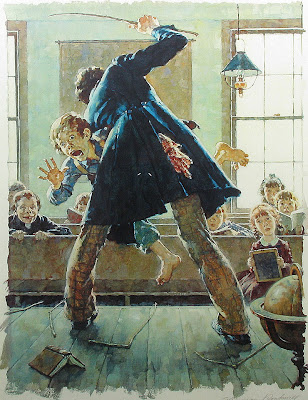 Tom Sawyer: “The master's arm performed until it was tired, and then the stock of switches notably diminished.” Norman Rockwell, Spanking, 1936

Mark Twain's characters Tom Sawyer and Huckleberry Finn epitomize the idea of childhood mischief, with their roguish antics and penchant for troublemaking.

Images of naughty children abound in nineteenth-century American visual culture, from the fine arts to the popular press. Dr. Graham C. Boettcher, The William Cary Hulsey Curator of American Art at the Birmingham Museum of Art, will explore the subject of mischievous children in American art and examine how such images played a role in cultivating and promoting new attitudes in child rearing.

This @Night program is made possible by grants from the Alabama State Council on the Arts and the National Endowment for the Arts. would also like to thank the Alabama Power Company Foundation for their generous support of @Night.
By Tressa Fancher