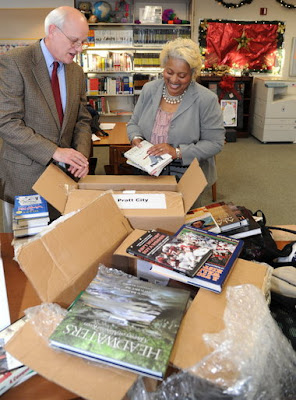 The books include titles related to Alabama history and other books aimed at young readers in the fourth to sixth grades. Among the books donated, you’ll find A.G. Gaston: Visionary Businessman and Diary of a Wimpy Kid: the Last Straw. Director Deborah Drake Blackmon says, “This is a big, big Christmas. All of these books are very much needed.” Though the Pratt City Library was heavily damaged by the tornadoes in April, almost all of the 20,000 or so items in the library escaped major damage. The items have been cleaned and are being stored until a new building is built.

In addition to the book delivery, the Birmingham City Council approved a contract with Harrington Architects to design the reconstructed Pratt City Library. With the book delivery and city government’s approval of a design firm, Pratt City Branch Library is turning the page on a challenging year.
By Tressa Fancher