Brown Bag Lunch Program: A Pianistic Holiday with a Touch of Class 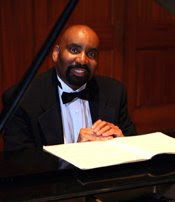 The library Brown Bag Lunch Series will feature Dr. Anthony Pattin in a midday mini-concert next Wednesday, December 14, at 12:00 p.m. “A Pianistic Holiday With a Touch of Class,” is open to the public, free of charge, in the Arrington Auditorium of the Central Library downtown. The program will include both seasonal favorites and classical selections. Pattin’s talent is well known throughout the Birmingham community. He has performed on Alabama Public Television’s “Pianist at Work” series, and has toured throughout the United States, including several performances in Carnegie Hall.

Pattin is the director of music at Chapel in the Pines Presbyterian Church, and on the music staff at St. Peter’s Catholic Church. As one of the most popular performers on the library calendar, “A Pianistic Holiday With a Touch of Class” will conclude the 2011 Brown Bag Lunch Series. The series will resume in January.

Feed your body and mind at BPL's Brown Bag Lunch programs. You bring the lunch and we'll bring the drinks. Wednesdays at noon in Central Library’s Arrington Auditorium.
By Tressa Fancher