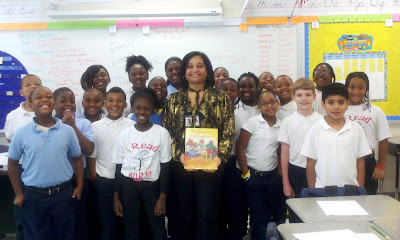 In her own terms, she was “born to be a librarian.” A love for reading, travel and service guided the steps of Saundra Ross-Forrest and led her to Birmingham and the Birmingham Public Library, North Avondale Branch. During her nine years as manager of the neighborhood library, she has worked tirelessly to make the branch an integral component of the North Avondale community. Today, that commitment has placed her in a prestigious position with nine other librarians from across the country. During a ceremony in New York, Ross-Forrest was named one of ten librarians to receive the Carnegie Corporation of New York/New York Times, I Love My Librarian Award for community service.

Ross-Forrest was recognized for going beyond the call of duty to develop outreach programs, foster innovative ideas for service and provide a friendly library setting that keeps regulars and newcomers walking through the doors. "While many people look at the North Avondale community as a place where children could be destined to a life of drugs, teenage pregnancy and poverty, Saundra has a different viewpoint. She sees the area as a place that can grow a garden full of successful professionals. To reap such a harvest, it depends on what you put into the soil. Saundra is using her library to plant seeds that are destined for greatness. She doesn’t believe in the word, “No.” She uses the power of “Yes” as fertilizer to make the community’s garden something that will benefit everyone," said Gwendolyn B. Guster Welch who nominated Ross-Forrest for the award.

Ross-Forrest is one of four children born in Montgomery, Alabama, to David and Sarah Ann Ross. She is a graduate of Jefferson Davis High School (Montgomery) and Troy State College where she received a Bachelor's Degree in Social Science. Ross-Forrest received her Master's Degree in Library Science from Clark/Atlanta. Since 2002 she has served as the North Avondale Branch Manager.

The award encourages library users to recognize the accomplishments of exceptional public, school, college, community college and university librarians. It carries with it a $5,000 cash award, a plaque and a travel stipend to attend the awards reception hosted by The New York Times. Librarians in our nation’s 122,000 libraries make a difference in the lives of millions of people every day. Over the past three years, 30 librarians from across the country have won the I Love My Librarian Award. This year, more than 1700 nominations were received. Each nominee must be a librarian with a master’s degree from a program accredited by the American Library Association (ALA) in library and information studies, or a master’s degree with a specialty in school library media from an educational unit accredited by the national Council for the Accreditation of Teacher Education. Nominees must be currently working in the United States in a public library, a library at an accredited two or four-year college or university or at an accredited K-12 school. The award is supported by Carnegie Corporation of New York and The New York Times and administered by ALA, the oldest and largest library association in the world, and The Campaign for America’s Libraries, ALA’s public awareness campaign about the value of libraries and librarians.

The mission of the Birmingham Public Library is to provide the highest quality library service to our citizens for life-long learning, cultural enrichment, and enjoyment. This system—with eighteen locations and serving the community for 125 years—is one of the largest library systems in the southeast.
By Tressa Fancher

Farah said…
Congratulations, Saundra! You deserve it for everything you do for your library and community.
11:54 AM