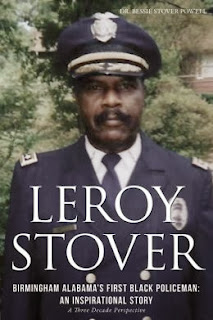 On Monday, November 25, at the Birmingham Public Library, Leroy Stover will share stories about what it was like to become the first black police officer for a Birmingham police force that was known in the 1960s for harassing and intimidating peaceful black marchers during the civil rights movement. Stover’s stories are in the new book Leroy Stover, Birmingham Alabama’s First Black Policeman: An Inspirational Story. He will sign copies of the book from 4:00-6:00 p.m. in the library’s Arrington Auditorium, 2100 Park Place. The books are $14.28. The Metro Birmingham Branch NAACP will host the event.

A Korean War paratrooper, Stover integrated the police department in 1966. He retired as a deputy chief in 1998. As Birmingham commemorates the 50th anniversary of the civil rights movement, the 80-year-old Stover said that 2013 is an ideal time to release the book.

“They didn’t spit on me or push me (on the first day.) But they did call me racist names and suggested I wouldn’t last the first day,’’ Stover said. When Stover entered the police roll call room, all of the white officers went to one side of the room, leaving Stover on the other side. Several of the officers pulled guns out of their holsters, blowing away imaginary smoke and using a racial slur while asking who was going to work with him. That incident only happened the first day, he said.

“All of the guys weren’t obnoxious and hateful. Some were very helpful,’’ Stover said. “But when they got around their peers, I was ignored. And I could understand that because there was peer pressure. But there were some who didn't care one way or the other.’'

“The only bright part of all of that was Chief Jamie Moore,… he wanted to see me make it.’’

Stover didn’t let the hate defeat him. He said he stayed on the force because he wanted to make it better for other minorities coming behind him. “I wasn’t going to give up,’’ he said.

When Stover retired, there were more than 860 police officers on staff, said Stover’s niece, Dr. Bessie Stover Powell of South Carolina State University, who wrote the book. Powell’s husband, Dr. Don L. Powell, and Stover, contributed to the book. “We are honored to write his story because it is not only American history, black history but it’s also the first account of Deputy Chief Stover’s bravery and achievement,’’ Powell said.